U8 Cricket Festival at King’s Hawford
Date: Thursday 7th June
Result: Won 3 Lost 1
Report: Year 3 took two mixed cricket sides to King’s Hawford on Thursday and played in a mini 6 a-side festival vs King’s Hawford. The games were played in great spirit and the players learnt a lot about how to play the game. Notable performances were delivered by Harris Rahman with the ball and Oliver Smoldon with the bat who both delivered match winning contributions in one game. As a whole group we need to work hard on our bowling accuracy and also our running between the wickets.

U10A v Eversfield U10A
Date: Monday 11th June
Result: Eversfield 144 Blue Coat 58
Most Valued Player: Luca Romano
Report: Eversfield batted first on a gorgeous afternoon on the main square. Dhruv got the side off to the perfect start bowling out their opener off the first ball! Another early wicket put pressure on the opposition but a strong partnership steadied the ship and Eversfield moved on to an impressive total. However, the boys fielding and bowling was much improved since their first game. Eversfield had some very quick opening bowlers who blew away our top order. Luca and Narayan put up some resistance but credit must go to Eversfield for the way they bowled.

U10B v Eversfield
Date: Monday 11th June
Result: Blue Coat 240-7, Eversfield 232-10
Most Valued Player: Imaan Iqbal batted with consistency & bowled a wicket maiden
Report: Blue Coat set Eversfield a moderate total of 240. Our running between the wickets wasn’t confident and we struggled to get the ball past them in field. After three pairs of Eversfield batting they looked on task at 230 to win. However some fine bowling at the end from William Brett, James Scurclock & Ayoluwa Ogunlola kept them below our target. The game went to the final over where Jake Meyer took two wickets to seal the win.
Scorer: Imman Iqbal (6) & Isaac Evans (6)

U9A Cricket vs Eversfield
Date: Tuesday 12th June
Result: BCS 264 – Eversfield 223
Most Valued Player: Freddie Williams
Report: On another glorious afternoon the U9A side played excellent cricket to earn a hard fought but convincing victory. Batting first each pair applied themselves well and only lost 1 wicket between them. This meant that 264 was a good total against some accurate bowling. The game was won, however, thanks to an excellent all round bowling display where all players bowled straight and with good accuracy. We still need to concentrate better in the field but hopefully this will come with age and experience!

U11A Cricket v Eversfield (A)
Date: Wednesday 13th June
Result: Blue Coat 65-5, Eversfield 42-10 (BCS won by 23 runs)
Most Valued Player: Mujtaba had a fantastic day, steadied the innings at a pivotal moment and bowled with pace and accuracy.
Report: With the traffic and a late illness we had to reduce the overs to 15. However at 11-5, after 6 overs I was concerned we may be turning back too soon to school! The partnership of 54 between Shayan and Mujtaba was the best I have seen from any Blue Coat pair. It included eight 4s and many singles to keep the run rate ticking over. 65 was very manageable and created a superb balanced match. However Blue Coat continued their fine display by taking consistent wickets. Their deadliest batsman was out early, which opened up the gates for wickets to tumble. In the 10th over it was all sealed with a run out from Hector Crow Marcetic. Very impressive!
Scorer: Shayan Patel (24), Mujtaba Mohuiddin (Bat:16 & Bowl:2-0-5-2).

U10C v Solihull
Date: Monday 11th June
Result: Blue Coat 11.5-9.5 Solihull
Most Valued Player: Shakthi Streevats- consistent bowling
Report: A great game of rounders, the girls played well as a team and were really encouraging to each other. They are really starting to pick up the rules and tactics of the game. Blue coat fielded well, making good decisions of where to throw the ball and trying hard to stop the half rounders. When in bat we ran hard between the posts and put the opposition under pressure resulting in a few extra scores. An exciting game and a well deserved win!
Scorer: Ava Nicholas

U10D v Solihull
Date: Monday 11th June
Result: Blue Coat 10-15.5 Solihull
Most Valued Player: Gargi Paneesha- good decision making
Report: For a lot of the girls it was their first competitive match against another school and they all rose to the challenge. A few fielding errors and wrong decisions in the first innings gave Solihull a good lead. In the second inning Blue Coat came out strong and tightened up their fielding, got down quickly and threw accurately to the post. Some excellent batting and strong running helped us notch up the scores. Although we tied the second innings this was not enough and so we narrowly lost. A great come back girls, well done!
Scorer: Caitlin Thornwell, Gargi Paneesha

U9A Rounders Tournament @ Kings Hawford
Date: Tuesday 5th June
Result: BCS won 2, lost 2, drew 1
Most Valued Player: Great team performance
Report: A fantastic day of rounders. The girls improved each game, speeding up their decision making and learning the tactics of the game. At times we batted really well, hitting outside the diamond and running hard between the posts but unfortunately at times we struggled to score and gave away easy half rounders. We ended up 3rd in our group out of 6, so narrowly missed out on semi finals. A great day, well done girls!

U9 Mixed v Solihull
Date: Tuesday 12th June
Result: BCS 16 – 13 Solihull
Most Valued Player: Team
Report: This was a fabulous fun festival of rounders where mixed ability teams played against another school. It was great to see the girls progress over the two innings with fabulous stumping at second from Jaya to brilliant consistent bowling from Priyam. The girls worked really well as a team and supported one another to make decisions. What a great show of both team work and character to go ahead and win the game. Well done girls!
Scorer: Priyam (2), Glory (1.5), Emily (2), Gloriosa (1.5), Anjali (2.5), Anya D (1), Jaya (2), Anya (1), Holly (1), Harriet (1), Lyba (.5)

U9 Mixed v Solihull
Date: Tuesday 12th June
Result: BCS 10-9 Solihull
Most Valued Player: Indira singh- fantastic batting and consistant bowling
Report: A beautiful afternoon of rounders in the sun. The girls played really well, hitting the ball and running hard between the posts to pick up valuable half rounders. In the field we got better as the game progressed, fielding the ball quicker and making the right decision of where to throw. A great game played in excellent spirit, well done girls!
Scorer: Indira Singh, Amrita Dhillon, Delina Elias 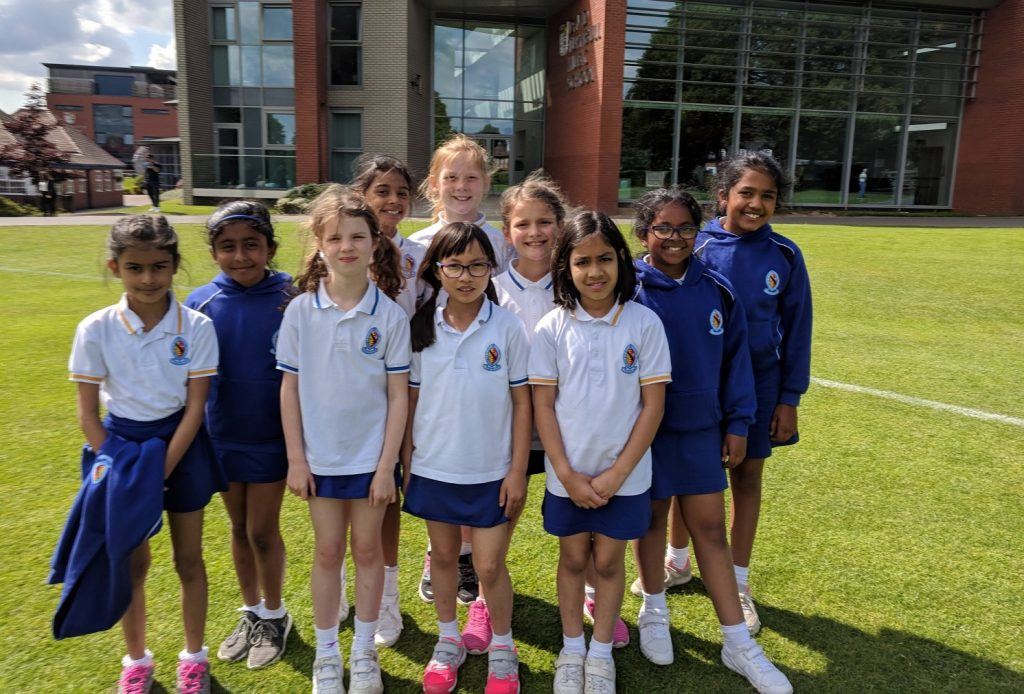