Most Valued Player: Daleep Rai bowled a superb maiden over for the A team

Report: The U11A season has drawn to a close with a disappointing loss. Bowling first we conceded 30 plus runs more than we should have with fast bowling rotations, not able to get into any rhythms. Their number three retired at 35, hitting some beautiful boundaries. When batting we were 40-0 at 6 overs looking so strong and up with the run rate. Wickets then began to tumble with 5 ducks recorded. Swinging at straight balls and not taking the game seriously enough, the overs ran out.
Scorer: Kairav Singh (12), Aryan Massey Arora (10)

Report: Lovely away fixture, and the scoring suggests it was a close game. The winner for both teams were wide balls, both conceding 60 runs. However Marcus Wigg hit a beautiful cover drive for 4, and Kush Rupal used his power to pull a full toss over mid wicket. When bowling the opportunity to have a second over each proved vital. West House were in a winning position with the final pair coming in. However Gurtej Hunjan bowled 5 wides in his first over, came back and took two wickets to make the total too great for West House to chase. The art of bowling straight requires a little more attention.
Scorer: Henry Coughlan bowled with lovely rhythm and straight lines.

Report: In a well fought game West House came out on top due to a strong batting performance where they managed to hit a number of boundaries which ultimately, along with a number of dropped catches, proved the difference between the 2 teams. There were notable performances from a number of players with Harry Forty hitting a number of boundaries whilst Harris Rahman, Dylan Ram and Konark Basu all bowled with good control and accuracy. As a side we need to work hard at concentrating in the field and focussing on the batsman and when batting we must learn to swing the bat through the ball to hit with more power.

The high total of King’s St Albans doesn’t represent the effort and progress shown by this group. 245 was a fantastic total as most runs were hit from the bat and we demonstrated excellent running between the wickets. However it is our bowling that just wasn’t accurate enough. It is repetition of a skill with so much practice time required, but I am still so happy about their progression this term. A fine way to end the season, watching the Worcester County 2nd XI whilst eating match tea.

Most Valued Player: John Cibelli for his fantastic knowledge on cricket rules and good team leadership

Report: Lovely afternoon to contest a house match. Both teams were given a super wicket where runs were doubled and this proved vital for St George’s, scoring 8 runs. The bowling had to be helped quite a bit, however this gave Hriday Parekh and Max Chen licence to hit the ball, with some fine shots through the field. It came down to the last ball of the match. St Philip’s were tying the game with a quick single, but they then chose to run the second. They were run out! Very lively and lots of fun.
Scorer: Max Chen 6 runs off the bat

What a superb way to send off the U11s with a classic house match in picture perfect settings. St George’s were consistent with their run rate, steady in the first 6 overs, then started to power ahead, taking advantage of the super over adding 22 runs. St Philip’s didn’t quite have the fire power when batting and runs were hard to come by. Plenty of quick singles, but they needed some brute force to get those fours to pick up the run rate. In the last over, 10 runs to win gave us the excitement, but it was too much for St Philip’s. Well played, everyone! 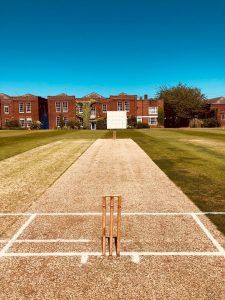 U11B Rounders v Hallfield
Date: Wednesday 20th June
Result: BCS 14 – 13.5 Hallfield
Report: This was definitely a match of two halves where we started confidently with rounders being scored by Sophie and Willow. Shalu took over bowling and we were making good decisions in deep field with Emma throwing herself at the ball to try to catch it. Bryneet was as confident as ever on second and we were stumping Hallfield players out. We went ahead in the first innings by 3.5 rounders. In the second innings Hallfield came back strong and were scoring full rounders and we were holding on to our lead through quick thinking from Emma and Bella. Kiran did well at fourth being able to stump people out and Rebecca became more consistent as backstop. With four players left to bat they were only half behind. The girls really came together and supported one another to make good choices and we held on to win the match by half a rounder. A great way to finish the season and winning their last ever match representing The Blue Coat School.