U9B Hockey v RGS
Date: Tuesday 18th September
Result: BCS 5-0 RGS
Most Valued Player: Khadija Kamran
Report: A fantastic start to the season. Blue Coat battled hard and were eager to go forward with the ball. As the game progressed we got better at spreading out and passing to a team mate in space. Some strong defence kept RGS out but to improve we need to look to pass out wide and clear the ball out of the danger zone. A promising start though, well done girls!
Scorer: Khadija Kamran (2), Imogen Brinkman, Kenza Kachloul, Harleena Grewal
Miss Crews

U9A Hockey v RGS
Date: Tuesday 18th September
Result: BCS 4- 1 RGS
Most Valued Player: Anoushka Hart
Report: An excellent start for girls, they should be very pleased with their first win. They worked really hard together as a team right from the start securing their first goal within the first quarter! Our defensive unit worked effectively to keep the ball away and put the RGS girls under pressure, denying them opportunities to score again and again. As the game went on and the girls were able to use the space more effectively and keep their shape, this enabled us to push on further and finish 4-1. Well done girls.
Scorer: Lucie Evans (2), Alex Scouter, Caitlin Liew

U11C Hockey v King’s St Alban’s
Date: Wednesday 19 September
Result: BCS 0-0 Kings St Albans
Most Valued Player: Jaya Kanda & Lily Cook
Report: A great first match by the Blue Coat girls. Blue Coat came out strong and worked really hard to get the ball going forward on the grass. As the game progressed the girls got better at passing early and working as a team to go forward. To improve we still need to use the full width of the pitch. The girls had a few opportunities and were unlucky not to score. Excellent defence kept King’s out of our D for most of the game. A great start to the season, well done.

U11B Hockey v King’s St Alban’s
Date: Wednesday 19th September
Result: KSA 3 – 0 BCS 0
Most Valued Player: Gracie
Report: With some strong wind and some rain our hockey season started. Caitlin made her debut in goal and once settled she made some good saves. We looked good when defending and were winning tackles all over the pitch but we kept giving the ball away cheaply putting ourselves back under pressure. It was encouraging that Gracie, Joanne, Chloe and Lily were all able to play in varying positions and although King’s won 3-0 this does not reflect how the team played and especially how they played in the second half. The girls all worked hard in both defence and attack especially Natasha and Serena and I really enjoyed watching how we moved the ball quickly forwards in attack between Elspeth and Matilda but unfortunately we could not manage to score.

U11A Hockey v King’s St Alban’s
Date: Wednesday 19th September
Result: KSA 2 – 4 BCS
Most Valued Player: Kate
Report: As it was our first game of the season I didn’t quite know what to expect especially as King’s had beaten Bromsgrove last week. However, this was quite possibly the best U11 hockey performance I have had the privilege to be part of since I have been teaching. I can not thank each and every girl enough for their hard work throughout the match with midfield trio of Bea, Kate and Lexie leaving no part of the pitch untouched. I was delighted to see our training pay off as we also scored from our penalty corner. With Ojal and Storm hustling every free hit given. Daphne made some saves throughout and Maya was solid making defensive tackles and linking the defence to attack. Tara came on and made a nuisance of herself showing strength on the ball. Although 2 goals were conceded from a strong St Alban’s team our belief and desire to play for each other, make that last ditch tackle and drive forward with confidence on the ball was a delight to watch. Kate’s goal in particular was nothing less than awesome. Wow! From start to finish this was a thriller!
Scorer: Ojal, Kate (2), Storm
Mrs Bennett

U11D Hockey v King’s St Alban’s
Date: Wednesday 19th September
Result: KSA 0 -1 BCS
Most Valued Player: Daisy Drake
Report: A very good start to the season with determined attacking from Daisy and effective defending. Most of the game was played out in the opposition’s half and we were lucky to get a goal. Well done! 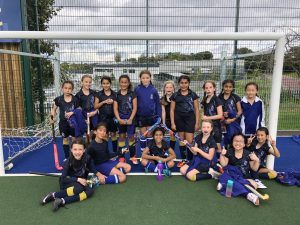 U9B Rugby Festival RGS
Date: Tuesday 18th September
Result: Festival matches v Warwick, Abberley, King’s Hawford Warwick 2, Winterfold
Most Valued Player: The team – I was extremely proud to see the determination and commitment to tackling and drive to go forward with the ball.
Report: The first festival of the season was a busy afternoon for the Bs with 5 back to back matches. Scores were not kept in the spirit of the game. Oliver Smoldon led the line with dominant tackling, confidently supported by Joel Drake and Jack Whiting. When Samuel Tan opened up his legs there weren’t many opposition players who could keep up! As a team they held a fantastic defensive line from restarts and supported the ball carrier well in the tackle. Marcus Wigg injected speed, breaking lines of defence and Gurtej Hunjan with a late call up showed real strength to drive his legs through tackles.

U9A Rugby RGS Festival
Date: Tuesday 18th September
Result: Festival
Report: The U9A’s had a fantastic experience on Tuesday playing 4 mini matches, performing admirably in all games. The level of commitment shown by the boys was fantastic with great tackling to the fore. Some of the running with the ball was excellent and numerous tries were scored. Moving forward we need to get better at receiving the ball on the move.

U11C Rugby v King’s St Alban’s (A)
Date: Wednesday 19th September
Result: KSA 40 – Blue Coat 5
Most Valued Player: Arjun Bajwa stepped up as captain and put in a dominant performance
Report: The first fixture of the season is always met with pupils having to learn quickly. The rules around the ruck are tricky and KSA took advantage stepping through the gate & stealing the ball. However, our determination to run forward and look for support was a highlight. KSA had powerful players who ran through a few tries that we couldn’t defend. I’m looking forward to seeing more structured attacks and aggressive tackles in our sessions at school!
Scorer: Nahom Mehari
Mr Harrison

U11A Rugby v King’s St Alban’s (A)
Date: Wednesday 19th September
Result: KSA 45 – BCS 0
Most Valued Player: Oliver Smith
Report: An excited and eager Blue Coat team took on a well drilled and fierce opposition of King’s St Alban’s. In difficult and blustery conditions we took to the pitch focussing on working as a team to protect the ball and staying positive throughout the game. Despite conceding an early try, we continued to run good lines with the ball only to be hit back with a solid defence. The first game of the season has given us plenty to focus on during training, but we look forward to coming back from our first defeat. Special mentions go to captain Oliver Smith, Luke Dolan and Ay Ogunlola for leading their team in both attack and defence.

U11B Rugby vs King’s St Alban’s
Date: Wednesday 19th September
Result: KSA 30 – 0 BCS
Most Valued Player: Luke Allen/Amaar Gill
Report: The U11B team put in a spirited performance with Luke Allen and Amaar Gill excelling in a competitive game. The score line didn’t reflect how competitive the game was and it was played in an excellent spirit. The opposition had a couple of players that had some real pace and ultimately this showed. The team need to work hard on applying pressure without the ball as a unit so there aren’t big gaps that the opposition can exploit.