On Saturday 2nd February, 17 chess players from The Blue Coat School and their parents made the short trip to Hallfield School to play in the quarter final of the National Primary Schools Chess Championship. There were two sections, for Under 11s and Under 9s. We had one team in the Under 11s, and two in the Under 9s. All of the Blue Coat chess players were looking very stylish this year as well in their lovely new hoodies!

In the Under 9 section, Samuel, Arjun, Harleena, Karam, Lucie and Wilf made up our ‘A’ team, and Abhav, Nihal, Ethan, James and Kush were our ‘B’ team. This was a tough section, with experienced teams from Hallfield, West House and St Mary’s standing in our way. In the ‘A’ team Samuel played on board 1, facing the strongest players in the competition. Although he didn’t achieve the results he would have wanted, he kept working hard at the board and approached each game with strong resolve. Arjun bounced back from a tough start to win a good game in round 3, while Harleena kept her cool to win in a tricky endgame in round 2, and followed up with a solid draw against a good player in round 3. Lucie and Karam played well on boards 4 and 5, and didn’t quite achieve the results their hard work deserved. With this experience, and the knowledge of the importance for taking their time a little more, they will come back much stronger in the next competition. On board 6, Wilf played some great chess and scored a well-earned 3/5.

In the ‘B’ team, Abhav scored an excellent 50% on board 1, recovering from two defeats in the first rounds to score 2.5 out of the last 3 games. Nihal won two excellent games in rounds 3 and 5, while Ethan played well and just needed a little more patience to convert some good positions. James was playing in his first tournament, but was not to be overawed and scored a great win in round 3, and a hard fought draw in the last round. Finally, special mention must go to our star player in the Under 9 section: Kush kept his cool in some very complicated games, and won 4 out of 5. Well done Kush!

Our Under 9s didn’t quite manage to finish in a qualifying place this time, but they have all gained some valuable experience and I’m sure will come back for the next tournament as better players.

In the Under 11 section, competition would be fierce, with some highly rated players in attendance. This would be a strong test for Aarav, Aidan, Priyamvada, Josh, Henry and Oje. What a pleasure, then, to be able to report that they all played fantastically well, finishing in 3rd place, winning bronze medals and qualifying for the semi final! Aarav Massey had the task of facing all the very strongest players in the tournament on board 1. After defeats in the opening two rounds, he had an absolute roller coaster of a game in round 3. Initially in a winning position, his opponent found a clever trick to win back a rook, and head into a queen endgame with an extra pawn, putting Aarav on the defensive. This is a notoriously difficult situation from which to recover in chess, but Aarav showed brilliant determination and concentration to not only come back into the game, but to obtain the advantage once more and win the game after nearly an hour’s play. Buoyed by this result, he scored another fine win in the next game. Aidan scored a wonderful 4/5 on board 2, while Priyamvada won a nice game in round 1, and found neat checkmates in rounds 3 and 5. Josh played his first tournament on board 4, and played brilliantly to score a solid 50%, which would have been more had he avoided an unlucky stalemate in round 5. Henry played with impressive maturity, always taking his time and never rushing in complicated positions. This was rewarded with an excellent 3/5. Oje battled hard on board 6 and scored an excellent win in round 2.

On a personal note I’d like to say how proud I am of all of our chess players who took part on the day. In between games I often heard many congratulations after players had won their games, and words of support after defeats.

I’d like to thank all the players who took part on the day, and their supportive parents for bringing them along. I hope you all enjoyed it as much as I did, and I’m looking forward to the semi final already!

Congratulations also go to Ojal who represented Warwickshire under 11 girls team held at Nottingham High School on 9th Feb 2019. She won all 3 rapids rounds and won  a gold medal and her Warwickshire county team won the championship trophy. 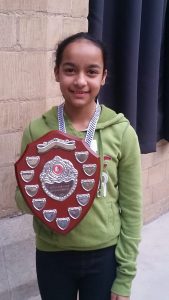