Freya started Taekwondo in 2014 with the ‘Staffs Taekwondo sports and fitness club affiliated with British Taekwondo, World Taekwondo Federation (WTF)’ in Stoke on Trent. After moving to Birmingham in 2016 Freya, continued training with same club as there was no suitable club nearby that was training the same form. Her training involved travelling to Stoke once a week until she started preparing for Dan grading. Over the past one year she has been travelling to Nottingham every Saturday in addition to her normal training routine as it is essential to train with different people, attend seminars etc. during higher grades.

According to Master Andy Cawley (Freya’s instructor), “Freya is an exemplary student very committed who practiced her routines alone, travelled a lot, participated in many national and local competitions and has become one of the youngest students ever to receive a black belt in Club’s history since 1999”.

Freya believes, “Taekwondo is very good as it teaches self-defence skill in a much disciplined manner alongside it keeps people fit. I use to feel scared of getting injuries during my training with some of the black belt students but I continued and now when I wear my own black belt I feel happy that I didn’t give up. One thing I like in particular from my training and grading tests in Taekwondo is that every student big/small than me helped each other learning the right technique and not practice something wrong to let other person down. I would like to say thank you to Sir Andy for supporting me during all my training sessions’ competitions and even coming to Birmingham for my training. Thank you to Grandmaster Ian Lennox, Sir Leslie and other staff at KangHan Nottingham for helping me all the times”.

Achieving black belt is the beginning of entry to the world of Taekwondo and not the end to Freya’s journey. Freya has already started working towards her next Dan grading. She will now join a newly opened club locally and will continue to attend the training with her previous club occasionally. 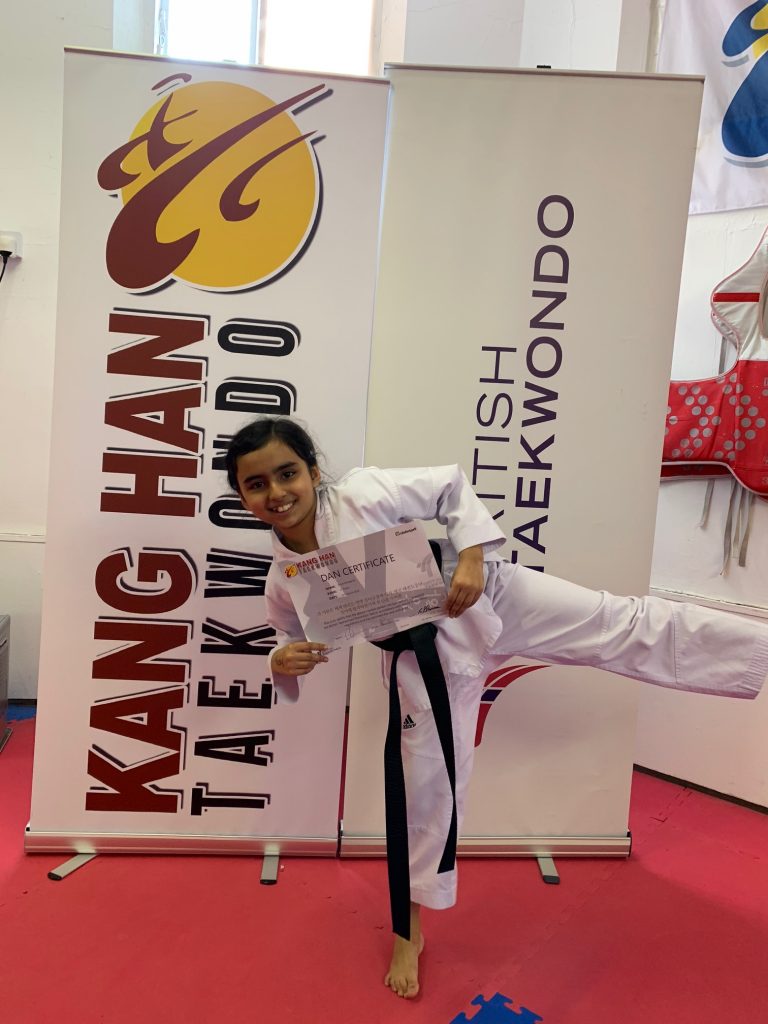