U8-U11 Hallfield Athletics Track Relay Events
Date: Thursday 23rd May
Result: Year 5/6 Boys 1st, Year 3/4 Boys 1st. Year 5/6 Girls 3rd, Year 3/4 Girls 3rd
Most Valued Player:
Report: This was the first track meet of the summer and the weather was perfect for what was an incredible display of athletics. All of the events were competed in relay format and all teams should be thrilled that every change over was clean. Our first event was over a 50m shuttle and all the girls competed from year 3-6 as a team and came home second. The boys all competed in the same events and came first which was tightly contested the whole way through the different age groups. The next event was to 400m relays which were fun to watch especially with AY stepping in at the last minute to compete and helping his team of Oliver Almond and Oliver smith come home first. The 200m relays were terribly exciting and the cheering literally was ear blowing with 1st places for year 3/4 girls (Ria, Susie & Claire), year 3/4 boys (Jai, Jackson & Remy) and Y5/6 boys (Adam, Ishan & Freddy). The year 5/6 girls came 3rd place with a team made up of Kate, Emily and Amrita. The final event was the Medley Relay and we knew we were in the running for being placed either first or second against Solihull dependent on where we finished in the final event. We started off strong with y3/4 girls (Safiya, Amelia, Susie, Lucie, Ria & Claire) and got a hard fought 3rd place. The year 3/4 boys seemed unstoppable with a team of Jackson, Jai, Remy, Sam, James & Harry nothing was going to stop them crossing the line in first place. The year 5/6 girls medley team (Amrita, Emily, Kate, Ojal, Bea and Indira) held their own as they came home in a strong 3rd place. Whilst the year 5/6 boys team had to pull off the relay of their lives to come home second to fend off Solihull and Take the boys top prize. The athletes ran so hard for their school in what was a high standard of athletes and both girls teams got bronze medals for their efforts. Both boys teams came first and received winners cubes and staff from other schools were amazed by the talent within our team. Well done to all who competed!
Mrs Bennett

U11A Football v Old Lady of Fatima School
Date: Thursday 23rd May
Result: BCS 0 -1 Old Lady of Fatima
Most Valued Player: Felix Iliff
Report: In one of the most extraordinary games of football I’ve seen in a long time the U11 boys lost by the finest of margins in the Harborne Cup 1/4 Final. The team played fantastically dominating possession and creating chance after chance however they found themselves up against an inspired goalkeeper who made save after save. This combined with some wayward finishing left us open for the old fashioned smash and grab and this was duly delivered with the one attack the opposition had! The only disappointing thing was that some of the players struggled with going behind emotionally and at these moments this is where you need greater resilience. The team as a whole though were excellent and they have been a pleasure to work with this season.
Mr Protherough

U8A&B Cricket v RGS
Date: Thursday 23rd May
Result: A team won, B team Drew
Most Valued Player: A team -Daisy Whitehouse, B team – fantastic team performance
Report: A fantastic afternoon of cricket played in great sunny conditions. The girls played really well in their first ever cricket match for the school, striking the ball well and running hard between the wickets. A few girls were able to hit the ball for 4 and many picked up 1s and 2s. In the field they all persevered with the bowling and keeping their arm straight and aiming for the wickets. Lots of learning went on and they all had lots of fun. A great start – well done girls!

U10 A Girls’ Cricket Tournament
Date: Monday 3rd June
Most Valued Player:
Report: This was the first taster of competitive cricket for nearly every girl playing and it was great to see their attitude towards the game with all of them bowling over arm whilst other schools used a simpler under arm bowl. In our first match versus Dunchurch, Delina took a wicket and our best batting pair was Indira and Emily scoring 22. In our second match v St Mary’s both Delina and Indira took wickets whilst our batting improved considerably with Indira and Emily (32), Anjali and Poppy (14), Delina and Sofia (16) and Simran and Anya (12). We lost both matches and went on to play BCS B team in a 5th and 6th play-off. We beat the B team by 23 runs but this was really closely contested match right up until the final pairing. This was a great introduction for the girls to cricket which over the term we can only improve on, especially with so many watching the cricket World Cup.
Mrs Bennett

U10 B Girls’ Cricket Tournament
Date: Monday 3rd June
Result: Won 1 game, Lost 3, finishing 6th out of 11 teams
Most Valued Player: Jaya Sharma Patel
Report: A fantastic opportunity to play 4 games of cricket. The girls have really taken to the new sport, quickly learning the new skills required for cricket. All our girls attempted to bowl over arm and I was really impressed by Anya, Freya and Jessie, who all bowled with pace and accuracy. All the girls enjoyed batting, running hard between the wickets and hitting the ball into space for 4 and even a few 6’s. Jaya, Maysoon and Jessie showed particular strength in this area connecting well and driving the ball to the boundary. The girls have been quick to pick up the rules and tactics of the game and as matches have progressed we have got better at running between the wickets and fielding the ball quickly. A fantastic day of cricket, lots of learning and fun had by all.
Miss Crews

U9A Girls’ Cricket V RGS
Date: Tue 4th June
Result: Match abandoned due to bad weather
Report: The girls got off to a fantastic start, fielding well, moving to the ball and bowling accurately. Blue Coat took some good wickets from catches, run outs and bowling. Claire and Caitlin both took a great catch in the field. Unfortunately due to the weather we were unable to complete the fixture as the heavens opens and the match was abandoned.
Miss Crews

U9B Girls’ Cricket V RGS
Date: Tue 4th June
Result: Match abandoned due to bad weather
Most Valued Player:
Report: Blue Coat lost the toss and were put into bat. The girls batted well, running hard between the wickets. A few girls were able to hit 4s and even a 6! Unfortunately the game was cut short as the rain came down and the match had to be abandoned.
Mrs Bennett

U8A Girls’ Cricket v Kings Hawford
Date: Thursday 6th June
Result: BCS 300 – 242 KH
Most Valued Player: Anusha Singh & Daisy Whitehouse
Report: A great win and fantastic start to the cricket season. On a nice afternoon the girls won the toss and choose to field. All the girls attempted to bowl overarm, keeping their arm straight and rotated round the positions in the field. I was particularly impressed with Daisy, Anusha and Lois’s bowling who all bowled with good pace and accuracy. As the game progressed the girls got better at fielding the bowl and backing up their throws. We then went into bat and again the girls attacked the ball and ran hard between the wickets. A few girls were able to hit 4s and Lois hit two 6s. A strong start well done girls
Miss Crews

U11A Cricket v Solihull
Date: Friday 24th May
Result: BCS 80 -8 in 20 overs Solihull 81-8 in 17 overs
Most Valued Player: James Protherough 20 not out
Report: I went into this game a little bit nervous as it was an U11 fixture and we were playing “proper” cricket where if you got out that was it! That coupled with the fact we had picked 8 year 5’s meant I wasn’t quite sure how it would unfold. I shouldn’t of worried, to a man the boys performed admirably both with bat and ball, the only area that as a collective we need to improve on is our fielding which was “village” at times! Batting first Freddie Williams and Oliver Almond opened against a county bowler and showed great courage and determination against some quick bowling. Then after Dhruv Sasarla had shown some nice touches Luke Dolan and James Protherough put together a very useful partnership that helped us reach the score of 80. Our bowling was superb with Padley and Bashir both looking dangerous opening up. Bradstock showed real potential as a leg spinner and Ratti once again showed how much he has improved. Whilst they had one superb player who ran us ragged in the field I think without him we would have one this game which shows how well the boys did, great performance well done!
Mr Protherough

U10A Cricket v Solihull
Date: Monday 3rd June
Result: BCS 285 – Solihull 262 – BCS win by 23 runs
Most Valued Player: James Padley
Report: A fine performance by the U10 A team saw them run out winners against a good Solihull side. Put into bat the team batting reasonably although we lost a few more wickets then maybe we should have. James Padley played some caribbean cricket hitting numerous boundaries. However we must improve our running between the wickets as this cost us a few run outs, mainly down to hesitation. The bowling however was excellent with everyone bowling accurately. Adam Bashir, and James Padley bowled beautifully with great rhythm and good speed both hitting the top of off stump which was perfect. Our fielding was pretty good although we were put under pressure at times by some good running between the wickets and this again is an area we can improve. However with both the Bs and Cs also gaining positive results it shows thes strides we are making in cricket that we can go to Solihull and perform at such a high level, well done boys!
Mr Protherough

U9C Team Cricket v RGS The Grange
Date: Tuesday 4th June 2019
Result: Blue Coat 298 – 245 RGS The Grange
Most Valued Player: Sam Tan for good bowling and great running between the wickets
Report: The U9 C team produced a devastating display of accurate bowling and powerful striking to completely overwhelm the RGS side. Bowling first the whole side bowled straight taking a number of wickets and some of the catching was fantastic with Sam Hodges taking a great catch.
Mr Protherough 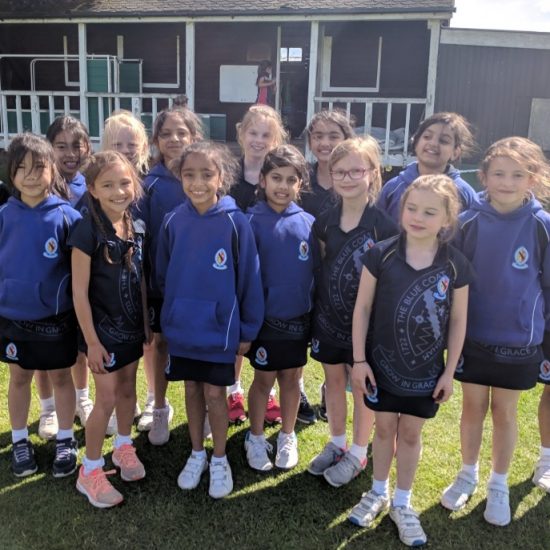 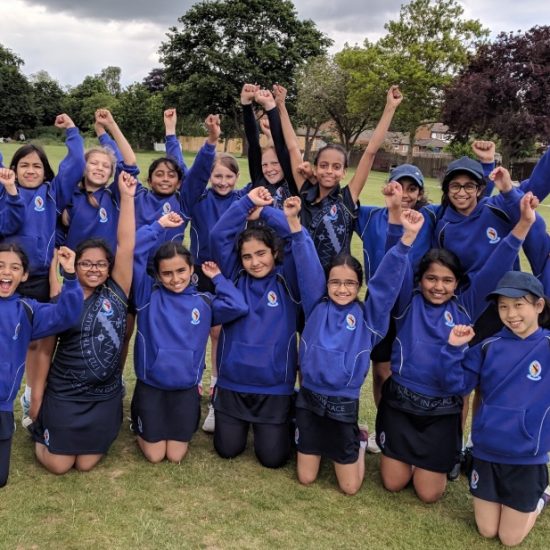 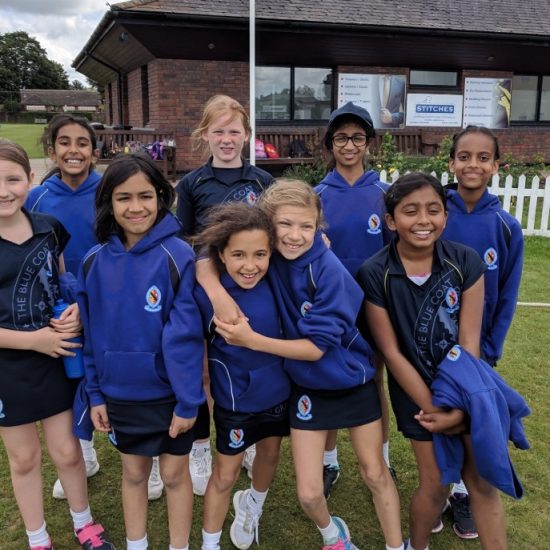 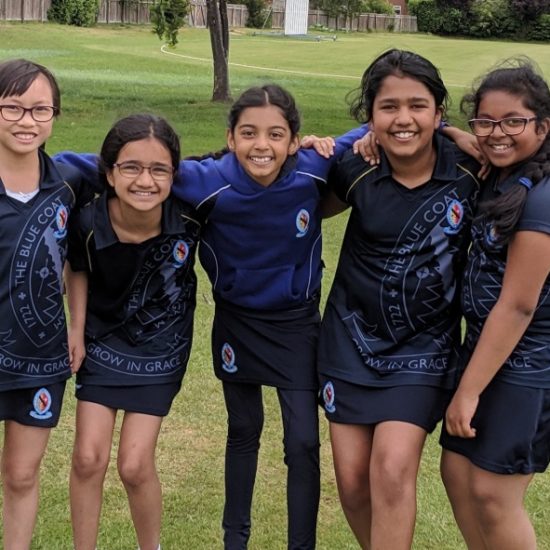 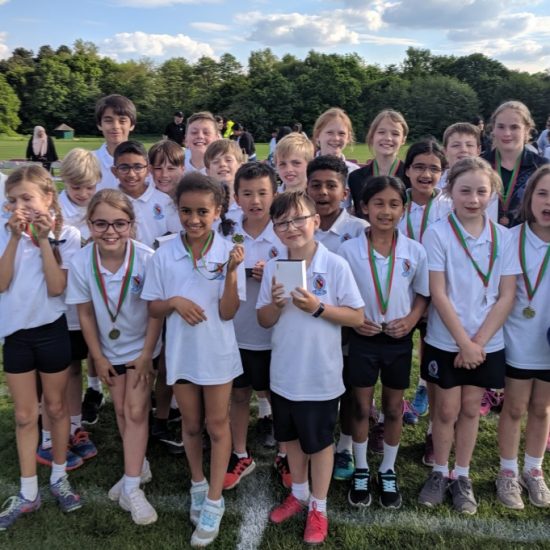