U10A Boys’ Cricket v Hallfield
Date: Mon 24th June
Result: BCS won by 22 runs
Most Valued Player: Nayan Najran for a superb spell of bowling
Report: The U10A side completed what can only be described as an excellent victory over local rivals Hallfied in a high quality game of cricket where both teams performed to a very high standard. The batting was given an excellent start by Smallwood and Protherough against some good fast bowling with an opening partnership of 26 however after this we tended to lose to many wickets although we did manage to hit a number of boundaries. A score of 80 was an impressive total however the first Hallfield pair set about the task with real intent and after 4 overs had scored 33! Thankfully this teams greatest strength is it’s bowling unit and whilst everyone bowled well, Nayan Najran bowled with great accuracy to ensure that in the end BCS ran out comfortable winners. Whilst our ground fielding was good our catching needs working on. These boys have been a pleasure to work with and with a good winter of training should be a real test for anyone next season, well done boys!
Mr Protherough

U10B Boys’ Cricket v Hallfield
Date: Mon 24th June
Result: BCS won by 45 runs
Most Valued Player: Yusuf Douis
Report: Firstly, apologies for omitting a report last week for the victory over King’s Hawford. The side were brilliant, and Indira Singh’s hat-trick was particularly amazing. The side continued with the same positive approach this week against Hallfield and the professionalism of the fielding and bowling performance was very special. Only 2 wides were bowled in the innings, so pressure was constantly put on the opposition batsmen. Some powerful batting meant that we posted a first innings total that was always going to be out of reach.
Mr Newman

U10A Girls’ Cricket v Warwick
Date: Mon 24th June
Result: BCS 256 – 223 Warwick
Most Valued Player: Emily Whitehouse – Fabulous 6 scored
Report: These girls have really taken to cricket and the progress they have made over such a short space of time is impressive. The whole team bowled overarm with Delina, Sofia and Simran all taking wickets. We fielded strongly with Freya just missing out of taking a wicket from outfield. Warwick finished on 223. We went into bat with opening batters Delina and Ishani making 4 runs as some indecisive actions meant they had 2 wickets taken in their 3 overs. Simran and Freya scored 9 runs again lack of communication meant they dropped 10 runs from Warwick taking 2 wickets running in between the stumps. Sofia and Jessie scored 19 runs with both Jessie and Sofia finding the boundary for 4. With the last pairing of Emily and Anya to go, Emily stepped up and whacked the ball for an excellent 6! The pair worked really well together taking runs where possible and finishing their over on 24 runs. I believe with more match play and experience this team will grow. Runs will definitely keep coming and wickets will continue to be taken through their direct and aggressive bowling.
Mrs Bennett

U10B Girls’ Cricket v Warwick
Date: Mon 24th June
Result: BCS 291- 278 Warwick
Most Valued Player: Layla Smith – great bowling
Report: A fantastic afternoon of cricket, the girls have really picked up the skills quickly and it was great to see them all bowling over arm with some now adding in a run up. Blue Coat lost the toss and were put into bat, hitting 4’s and 6’s and running hard between the wickets the girls notched up a good score for Warwick to chase. In the field we were quick to the ball however need to work on our accuracy of throwing to the wickets as we gave away a few extra runs with over throws. Our bowling was accurate and some of the girls are starting to get some pace on the ball. A great afternoon of cricket and a strong win for the girls, well done.

U10C Girls’ Cricket v Warwick
Date: Mon 24th June
Result: BCS 251- 270 Warwick
Most Valued Player: Maggie Lester – Fielder. Ananya Gulati – Batting
Report: The girls have worked really hard this term to quickly grasp the skills of the game  and for many of the girls this was their first cricket fixture. They should be really proud of themselves as  some really good cricket was played. All girls showed some real potential with either their bowling, fielding or batting skills. It was a very close game, Warwick lost the toss and batted first, scoring 270 runs. They played a safe game and only lost five runs to one wicket throughout their entire batting innings. Unfortunately, this is where we lost the game, when we went into bat we took too many chances that didn’t pay off and although, a few of the girls had an impressive batting innings we lost five wickets by being stumped out! Something that we can definitely work on. It was a lovely afternoon of cricket though and each and every one of them made progress as the match went on. Furthermore, I saw lots of enjoyment! Well done girls, keep it up
Mrs Somerville

U10D Girls’ Cricket v Warwick
Date: Mon 24th June
Result: BCS 234- 237 Warwick
Most Valued Player: Batter – Aqeelah Hussain Fielder- Humnah Khan & Bowler- Eva Seymour
Report: It was the girls first cricket match representing BCS and they showed excellent sportsman-like skills. Eva captained the team with confidence and led by example. The girls won the toss and chose to field first. We got off to a great start and Warwick weren’t able to score many runs. Ariana and Eva started the bowling off in excellent fashion and all the girls bowled overarm. Lots of no balls throughout the first half gave the opposition a chance to take a big lead in the score. After a half-time talk speaking about driving through the ball, ball placement and taking chances, the girls made good connections with the bat and ball and several 4s were scored- Eva even managed to get the only 6 of the game! With one batter left, we were tied on score and an unfortunate wicket meant we lost by three runs. The girls should be exceptionally proud of their efforts and it was lovely to see them communicating well and supporting one another as part of a team.
Miss Owen

U11B Boys’ Cricket V Eversfield
Date: Tues 25th June
Result: BCS 241 – 221 Eversfield
Most Valued Player: Faaris Alam
Report: A significant game today, as for some of the players this was their last game representing Blue Coat on the sporting field. The boys showed a matured and a supportive atmosphere on the pitch which led to a strong performance. Having won the toss BCS selected to bowl. Faaris, Imaan, Rohan, Ashley and Isaac all took wickets and were all able to take away runs from their overs with accurate and fast bowling. In the bat, BCS has shown vast improvement with identifying when to run between wickets. This saw an increase in singles taken advantage of in comparison to the start of season where there was little communication between the batters. Imaan and Isaac were our top scorers with a partnership of 16 runs. A great end for all the players – who have showed commitment and perseverance this season. Well done to all.
Mr Melia

U11A Boys’ Cricket v Eversfield
Date: Weds 26th June
Result: Eversfield 123 – BCS 51 Eversfield win by 72 runs
Most Valued Player: Taranvir Kang
Report: Playing against one of the best U11 teams I have seen was always going to be be tough, especially on a wicket that was offering plenty of assistance for the bowlers, however the boys bowled very well with Taranvir Kang dismissing 2 county players. If the catching had been better he would of had more in his 3 overs! There are a number of boys who show real promise as bowlers especially Dhruv and Ishan but they need to understand that it is going to take time, effort and patience to become accomplished bowlers. With the bat there is a lack of application and understanding that at times “staying in” is good enough. This is tough for youngsters today who have grown up on a feast of T20 cricket, but actually this world cup is proving that throwing your wicket away trying to dominate the bowling rarely works!
Mr Protherough

U8 A & B Boys’ Cricket v Warwick
Date: Thurs 27th June
Result: Not important
Most Valued Player: James Longworth/Arjun Desai/Aarya Yallapa/Remy Granger
Report: The U8’s travelled en mass to Warwick and the A & B teams were mixed together and played 2 mini matches against their Warwick counterparts. All 4 games were enjoyable close affairs with a mixture of lusty blows, accurate bowling, swings and misses and wides! However the boys really enjoyed the experience and as always it was superbly run by Warwick School who we have a great relationship with. Performances of note were provided by James Longworth, Aarya Yallapa and Arjun Desai, and Remy Granger.
***

U8 Boys’ Cricket C – F v Warwick
Date: Thurs 27th June
Result: N/A
Report: A great experience for over 40 BCS pupils who all travelled to play against Warwick. The field was filled with energetic and engaged pupils from both schools competing in a quick cricket format. Both teams batted for a selected period of time in which they had to score as many runs as possible. A new challenge of “one hand one bounce” brought in a new element of fielding which added to the excitement. All pupils got to experience the skills needed for a Cricket game in a fun, fast and inclusive game. Some great memories were made and every pupil brought something positive away from the experience.
Mr Melia

U8A Girls’ Cricket House Matches
Date: Thurs 27th June
Result: St Monica’s  300 – St Margaret’s  271
Most Valued Player: St Monica’s – Lois Hughes & Beatrice Salvi, St Margaret’s – Anusha Singh & Isla Adams
Report: A fantastic game of cricket out on the front wicket in the sunshine. It was lovely to see the girls enjoying the game, their bowling has progressed so much over the term with them all now bowling over arm. The girls ran hard between the wickets and are getting better at communicating as to when to run. A few girls were able to strike the ball cleanly and hit the ball for 4! A very competitive game played in great spirits, well done girls.
Miss Crews

U8B Girls’ Cricket House Matches
Date: Thurs 27th June
Result: St Monica’s  235 – St Margaret’s  187
Most Valued Player: St Monica’s player of the match – Riah Bailey, St Margaret’s player of the match – Nandini Kumar
Report: St Margaret’s opened the batting, with each of the St Monica’s girls in turn having a go at bowling an over overarm. Batting pairs faced three overs, with some excellent hits but also unfortunately a few errors in remembering their partner also had to run to the other end, which caused a few lost wickets. After the first innings we swapped over and it was St Margaret’s turn to bowl and field. There was some excellent batting from the St Monica’s girls, and they had learnt to be careful not to be run out. The majority of girls were playing in their first match and this was a fantastic achievement to display such good skills following their first term of cricket.
Miss Ward 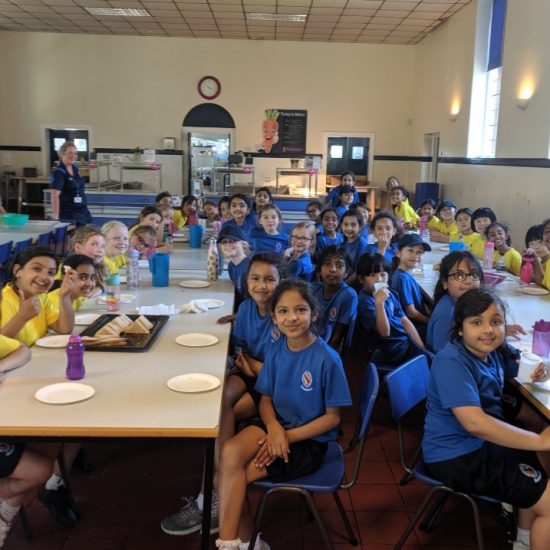 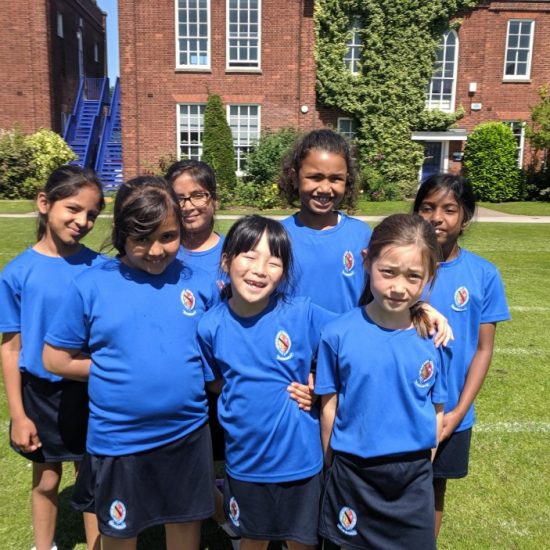 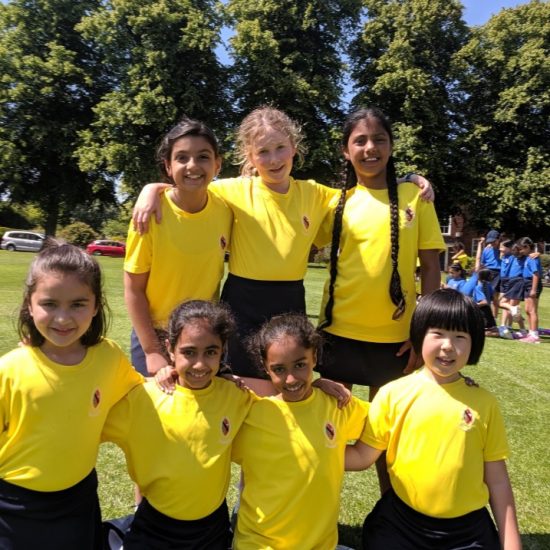 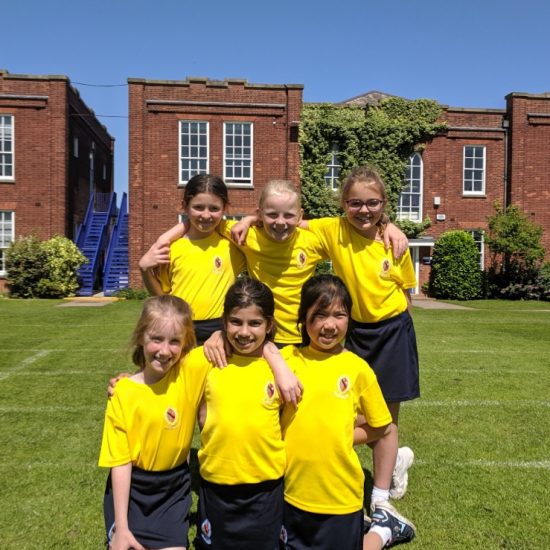 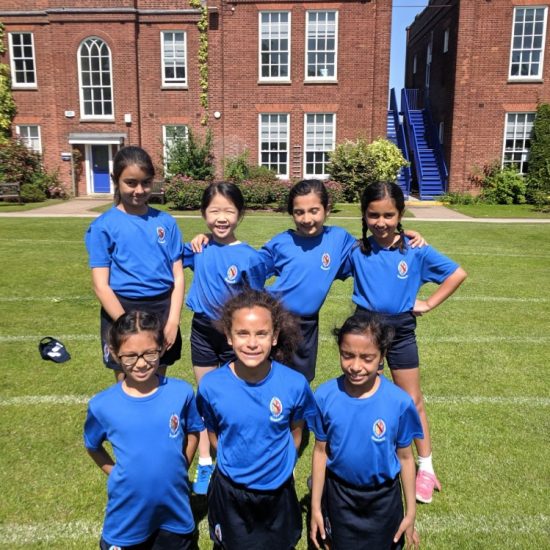 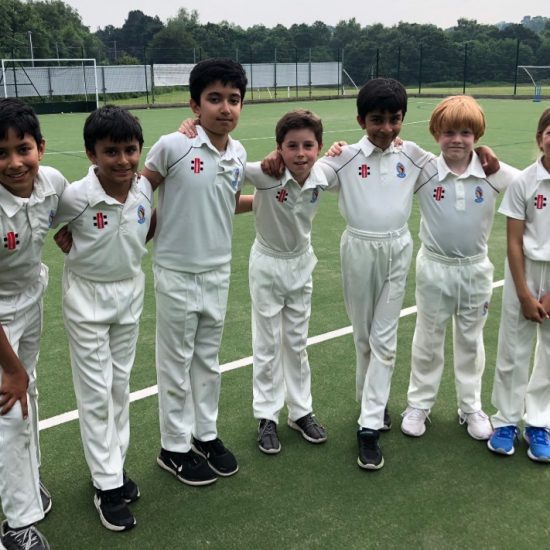