This week, Year 5 and 6 have been listening to a five-part story written by award winning author, Tom Palmer. The Question, is a story about a Holocaust survivor’s visit to speak at a school in the UK. The children discussed their reactions to listening to the story and why it is important to have a Memorial Day.

They understood how we must ensure that the atrocities of the past are not forgotten and that we remember the six millions Jews who lost their lives in the Holocaust, as well as other subsequent genocides.

In the words of the Holocaust Memorial Trust, we must “Be the light in the darkness” to ensure that we bear witness for our generation and future generations and ensure that this hatred can never return. 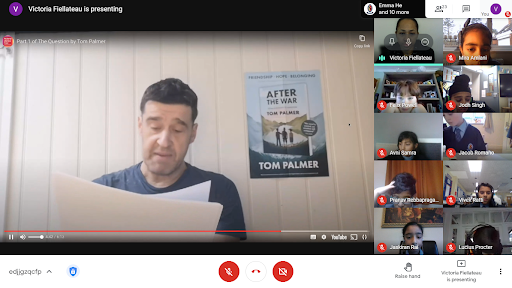 Here are some of the book reviews written by the children:

‘The Question’ by Tom Palmer. This book  is full of reflection and hope. It was very engrossing and engaging- they way they used cliffhangers at the end of each chapter frustrated me because I wanted to know more. It is about a man called Yossi Frankl who visits a class of Y7s. Here he tells his life story about being hunted down by Germans because he was a Jew. At the end, after being asked ‘the question,’ he encourages all pupils and staff to do whatever they can to help those who are in need like he was. My favourite character is Naomi- the girl who asks ‘the question.’ The book genre is history. I would recommend this book for Y5s and Y6s.” By Anuva

“This book is about a man called Yossi Frankl who a Holocaust survivor comes to a school and talks to some year 7s in an assembly to tell them about the holocaust. He tells them about his life before the Holocaust and tells them about what happened when the Nazis arrived. He the tells them about how he got away from Nazi occupied poland and how he escaped to the UK. Then he takes questions from the children and after that tell them how they can stop things like the Holocaust that are happening in real life. I would recommend this book to someone who likes books by Michael Morpurgo and I would recommend it to Year 5 and upwards.” By Jack