Player of the Match – Eliza Coughlan

When perfected, practise makes perfect! This term we have worked so hard in Cricket and it is always very rewarding when that hard work pays off. The girls made themselves and me very proud today with their attitude, teamwork and execution of skill. BCS girls were into bat first. They worked well in their batting pairs, encouraging each other through their innings. They consistently made contact with the ball, sometimes hitting the boundary. If I was being picky, I would like to see the girls making harder contact with the ball, but this is something we can definitely work on. RGS at times were a little slow to field our balls – well done girls you recognised this and used it to our advantage and made a number of runs off the back of this. BCS finished our batting innings with 132 runs. A very pleasing result. When RGS went into bat, BCS girls impressed me once again. The girls’ bowling was phenomenal – RGS really struggled to make contact with the balls that were being bowled to them. When they did hit, BCS girls were quick to field and worked effectively as a team to bring the ball back to the wicket, preventing RGS from making many runs. A super performance all round – well done. RGS finished with a score of 48 runs, making it a confident win.

Player of the Match – Madalen Cotterill

15 months in the making our U9 BCS Girls were the first team to have an Inter school match. With excitement filling the air, BCS went into bat first with Umaiza gaining some cheely ‘1’s’ and Aaria, Madalen and Tarini finding the boundary. A special mention to Tarini who also hit two excellent ‘6’s’. Although RGS did take three wickets in total, we played exceptionally well in our batting innings. Nanda and team captain Unayza bowled first and the standard they set continued throughout. Our bowling was really accurate and our fielders remained focussed. This amounted to a catch from Nanda and both Sabrina and Priscilla taking out the stumps from fielding positions. However, the nominated player of the match, Madalen, took the bowling crown on this occasion as she bowled two wickets in her over. What an amazing show of progress for these girls who haven’t played cricket since Year 2. I was so very pleased with all of them and how they conducted themselves from start to finish.

Player of the Match – Lucia Miao

The excitement of being on the bus on the way to an away match filled the coach as the whole year travelled to RGS for some Girls’ cricket. We started into bat first and Jodhay and Yi Ling looked brave standing at strike first and scoring 23 runs between them they set us off to a good start. Lola moved her feet towards the ball and quickly gained points and scored five ‘4’s from her over. This was a great start for the team which have only played cricket from this summer. To top it off Player of the match Lucia took a wicket and a catch from her over. This enabled BCS to edge ahead and just steal the match win.

Player of the Match – Maya McCracken

A beautiful afternoon of cricket. Our first away fixture this year and the girls were so excited! BCS were into bat first. RGS were consistently strong bowlers however brilliantly we were able to make contact. Unfortunately, we were not confident enough to make many runs. The girls needed to use their voices and communicate with one another much more effectively! Having said that, once the girls settled into the game, coupled with some encouragement from each other, they worked much better in their pairs and made some good runs, finishing with 69 runs. As we went to field, our bowling was unfortunately not as strong. This led to giving away a number of no and wide balls. The girls persevered and as the game went on their bowling did improve. RGS made some brilliant hits which reached the boundary, scoring 4 runs. We worked well as a fielding team. Overall however, I would love to hear more communication as a team – something to work on girls! RGS finished with 114 runs, winning the game this time round. Well done girls, a lovely afternoon of cricket.

Player of the Match – Georgina Byrne

The whole team played with great spirit and the RGS teacher stated how polite and receptive the team had been to her umpiring and coaching. We started off really competently with a fantastic high scoring pair of Imogen M and Antonella. We continued to gain nice little 1’s throughout which showed how well they did when communicating and working as a pair. When bowling, we remained confident and only gave away 4 wide balls in the whole over. However, RGS were on point with their batting and took advantage of our slow accurate bowling by hitting us for “6”. This is a point learned from playing the match against other girls and something we can now look at improving in coming weeks.

Player of the Match – Khadija Kamran

On a blistering hot day the U11A team had their first fixture against RGS. Captain Imogen Brinkman won the toss and opted to field first. The pitch was vast but the girls set their field well and Khadija opened the bowling. The first RGS pair got 12 runs from the first over and went on to finish with 23 runs. A BCS team bowled tight and Alex and Zuva only gave away 5 runs between them. There were a few missed opportunities out in the field to take some catches, unfortunately they were dropped. Lucie was the only bowler to take a wicket, well done! The girls went into bat chasing 109, they all worked hard in their pairs to make runs but the opposing team had some very strong bowlers who took 8 wickets in total! Captain Imogen and Zuva were the highest scoring pair. The final score was 109- 64. Well tried girls. 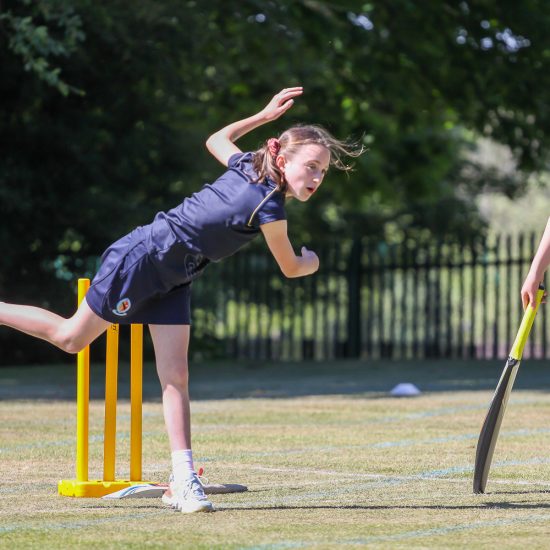 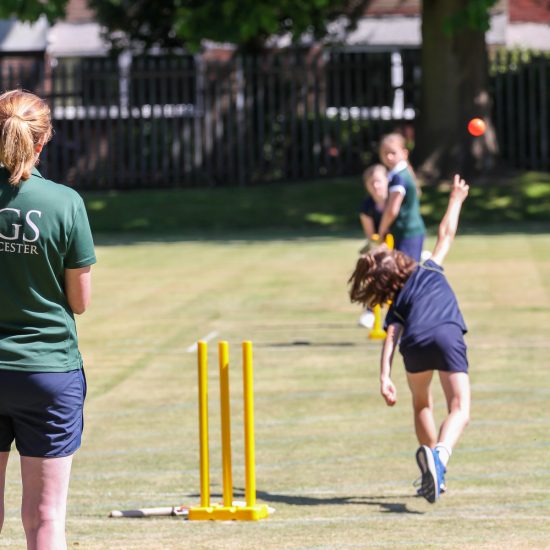 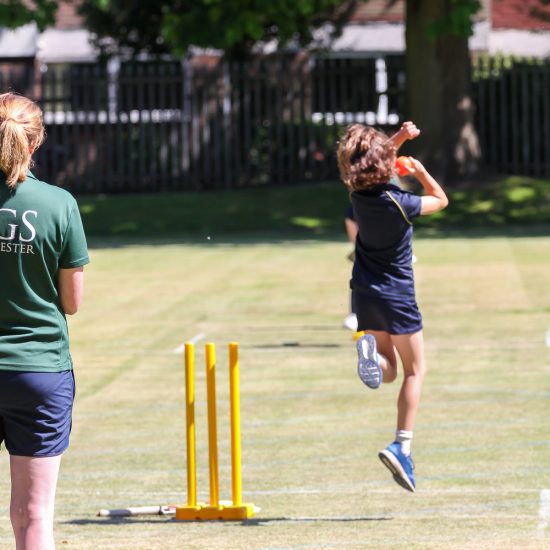 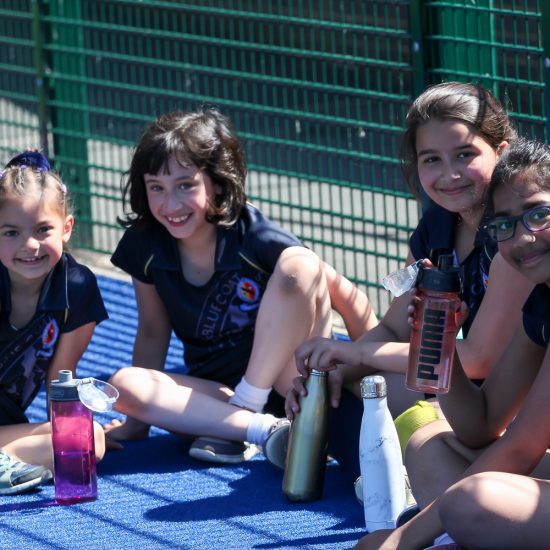 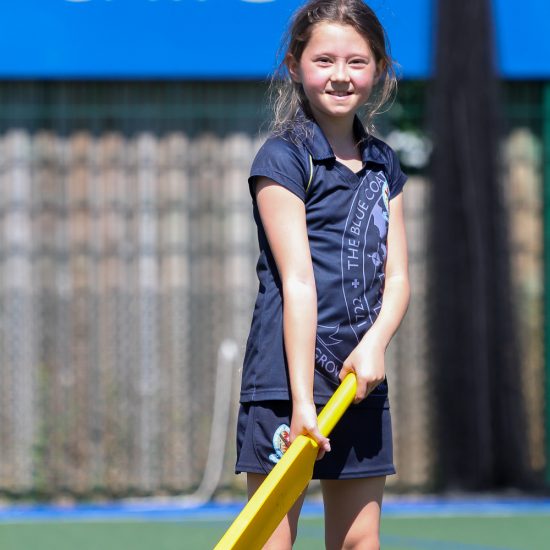 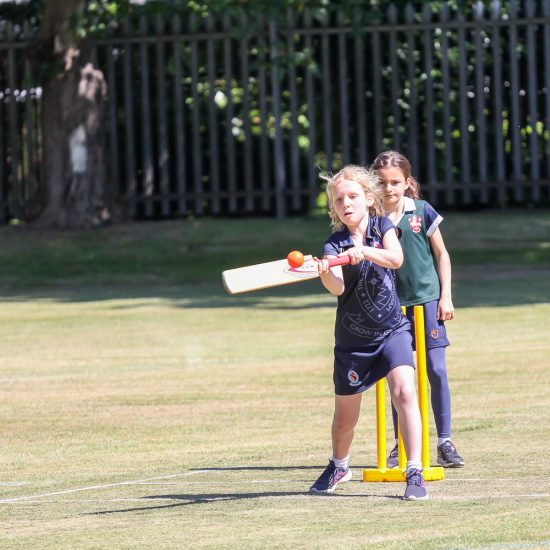 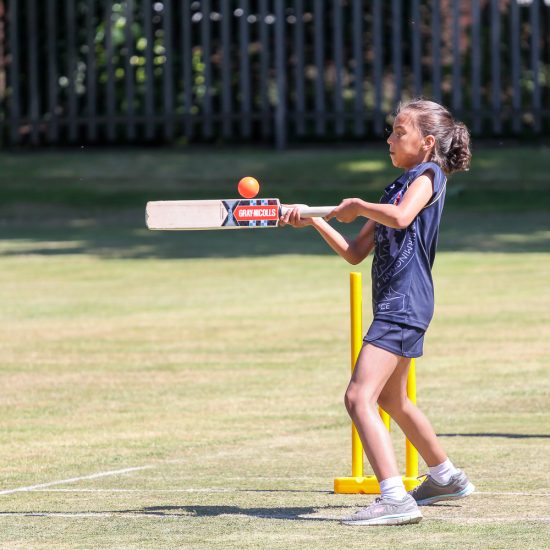