A fantastic way to start the Hockey season! Glorious weather, lots of lovely support from parents and a group of very excited girls, eager to play some competitive Hockey. Their first fixture playing on a full sized pitch and they played exceptionally well. I told the girls to try and score straight away and they did just that! Building their confidence very quickly the girls’ work rate was exceptional, they worked so hard for one another, demonstrating excellent team work particularly working the ball into the shooting D. At half time the girls had not conceded a goal, a credit to the defence, the score being 5-0. Going into the second half, the girls were confident but not complacent, they still worked hard for every ball. Even when I moved the girls around into different positions, they demonstrated really good versatility. King’s Hawford tried to keep the ball out of their shooting D, but our girls were too strong as a unit and were able to score another 6 goals in the second half. Final score 11-0 . Well done girls, as always a pleasure and very proud of your progress and hard work. Well done on your first win of the season.

A brilliant afternoon of Hockey. The girls were super excited to play their first fixture and they really did themselves proud. Playing on a full sized pitch, they really raised their game. They demonstrated an excellent work rate and very quickly in the first half scored their first goal. From this their confidence grew and grew, creating lots more opportunities to score again and they quickly took a strong lead. Any balls that King’s Hawford tried to move into their attacking half, our defence denied. A very impressive team performance, for their first match. The girls need to improve on setting up quicker on hit outs and sideline balls but that is something we can easily work on. Well done girls, you have done yourself proud! A very very strong win 6-0.

21 September U9A Touch Rugby Festival: RGS The Grange (A)
Score: No results were taken
Player of the Match: Rayan Basu

A hyped up Year 4 team headed to RGS for their first ever Rugby experience representing BCS. The Year 4 Rugby team played fixtures against RGS The Grange, King’s Hawford, and Winterfold House with the focus of the festival being learning, development and enjoyment rather than the outcome of victory and defeat. In the first game versus RGS the team started quickly out of the blocks with some direct forward running by Jasper and Freddie driving the team forward through a stubborn RGS defence. Rayan scored a try just inside the right wing finishing a well worked move with assurance and then Freddie pierced a gap through the opposition defence and showed a great turn of pace to get away from the opponents. Into the second game BCS showed good grit and determination in defence after being put under pressure by the King’s Hawford attack. Some handling errors in terms of knock-ons gave possession back to the opposition and continued to pile on pressure onto the BCS defence which gave away a couple of tries. Into the final game BCS started well showing some good passing skills and running forward at pace. In an evenly contested match Loic scored a brilliant try after a superb weaving run through the opposition defence. A good afternoon of learning with some excellent forward running by players but also some development needed in creating good attacking lines as a team and being organised into the defence when the BCS team does not have possession of the ball.

21 September U9B Touch Rugby Festival: RGS The Grange (A)
Score: No results were taken
Player of the Match: All players!

A very excited bus load of Year 4’s heading over to RGS on a beautiful sunny September day for their first every experience of a Rugby fixture. The purpose of the festival was to give everyone a quick taste of things to come, a good experience of the game and how it runs and finally the experience of travelling to an away game. We played 3 fixtures in total and as a result saw the boys grow in confidence and ability. There was strong running and evading from Finn Burrell, Idris Douis and George Griffiths Stamboulis. Alternatively, Brandon Lim and Siyuan Le provided excellent defence. As always plenty more to learn, but today has been a great start to the season.

21 September U9C Touch Rugby Festival: RGS The Grange (A)
Score: No results were taken
Player of the Match: Carlino Kumar

On a lovely Tuesday afternoon the Year 4’s travelled to RGS for a festival of rugby, and there was huge excitement as they took to the field. Some fantastic running from Oli Cowley and Carlino gave all the boys even more confidence and that led to some fantastic team defending which all the boys got involved in. The team really came together in third match where the passing and the support running was even better than in the first two games. After 3 matches in the hot sun and some wonderful rugby having been played, the players were tired but had enjoyed a fantastic afternoon playing their first rugby matches of the year.

All the team were very excited about their first match and looking forward to putting their hard work into practice. It was a very sunny afternoon so the decision was made to play 8 minute quarters so they could have a refreshment break. The team looked like a different class as they confidently started to play and went 1-0 ahead very quickly. The team worked really well with their positional play and both Lois and Riah worked incredibly hard to get to the back posts and take advantage of any crosses made. We managed to get into the right positions to score and the individual goals that were scored were impressive but still have much to work on to make every chance a success and develop our overall play.

The journey to Solihull was excitable as the girls were looking forward to playing their first match. It was fabulous to watch the team work on positional play and attacking as a unit. Rosa was sturdy at the back, keeping the team in shape and committed to every tackle. Ria was fabulous and looked graceful when moving down the wing and deadly when she was in the ‘D’ coming home with a well deserved hat trick. It was a blessing to watch what was happening on the astro and Solihull staff and parents congratulated the girls for their sportswomanship and their positional awareness.

The U11C team were super excited for their first Hockey fixture of the year! It was brilliant to see parents come and support and gave the afternoon a really good buzz! The girls did themselves proud. They worked really hard right from the start and showed RGS that they were a strong team. Keeping the ball in our attacking half for most of the game, the girls defended exceptionally well. At half time the score was 2-0. The score could have been greater but we were slow to get into the correct position to be able to shoot. After speaking to the girls and making a few changes, the girls played the second half demonstrating big improvements. They kept their shape better, creating space and the forwards stayed up, enabling a lot more shots at goal. The RGS keeper saved some brilliant balls to be fair, however we managed to score one more. Finishing score was 3-0. Well done girls, a brilliant start to the Hockey Season.

The U11D team were ready and raring to go. After having just watched the U11C team win, I could sense the nerves to perform just as well! These nerves were evident in the first 5 minutes of the game and unfortunately RGS scored early. However, once the girls settled they showed just how capable they were. They demonstrated some good passages of play one minute, but then the next minute they would be really close together, denying any space for each other to pass or move the ball forward. At half time I spoke to the girls and stressed the importance of space, shape and positioning. It was fantastic to see that the girls had listened and in the second half of the game, the majority of the play was in our attacking half. Frustrating that they couldn’t score, but the girls tried hard and should be proud of their improvements within the first game! We will keep practising, keep up the hard work girls! Well done. 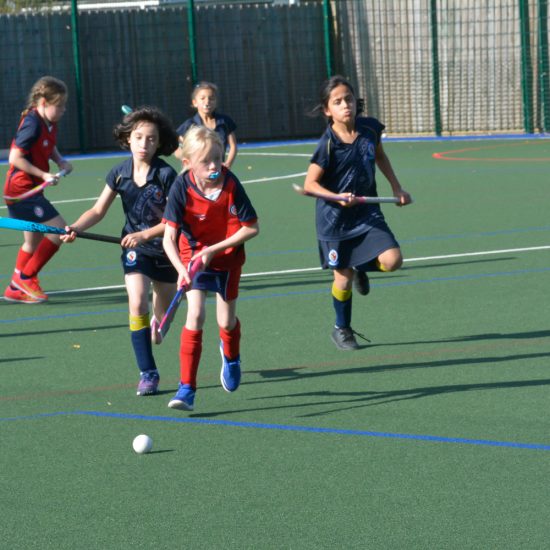 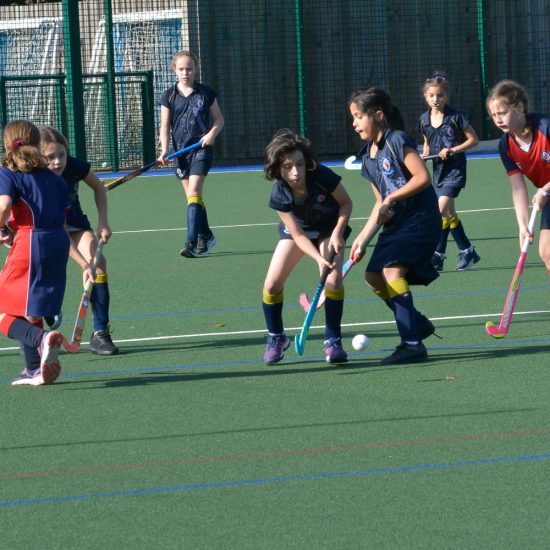 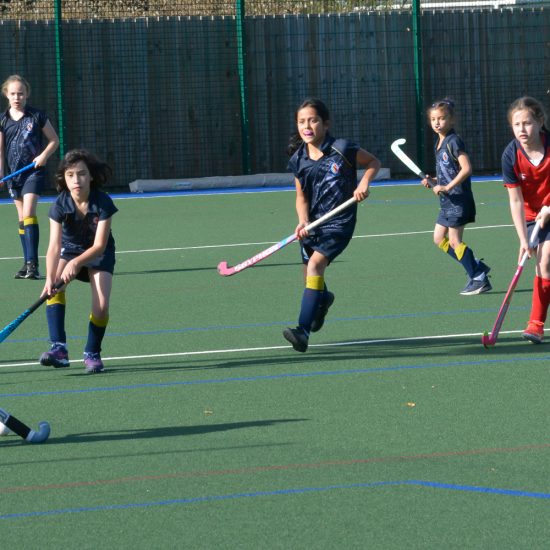 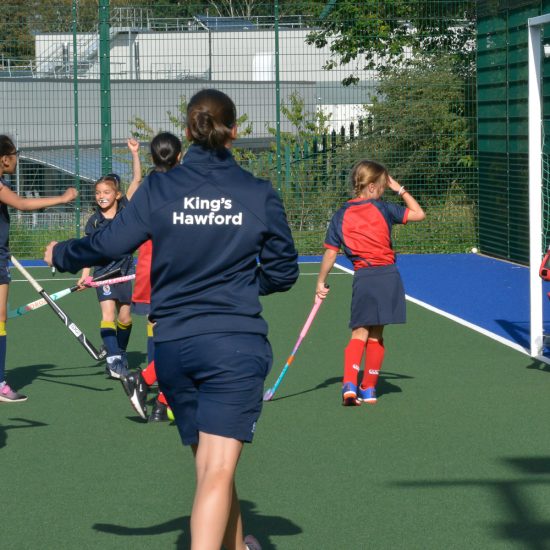 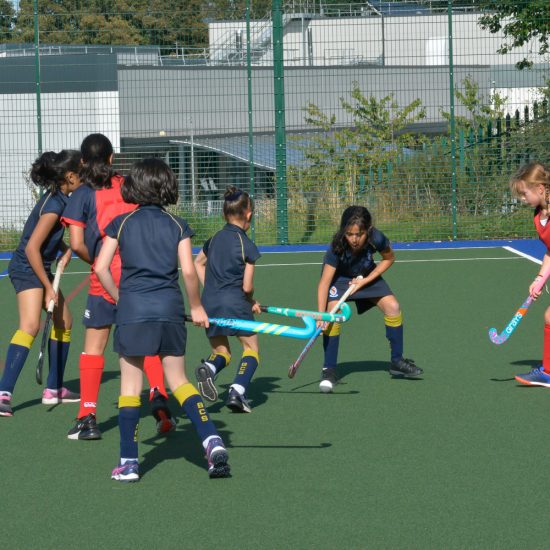 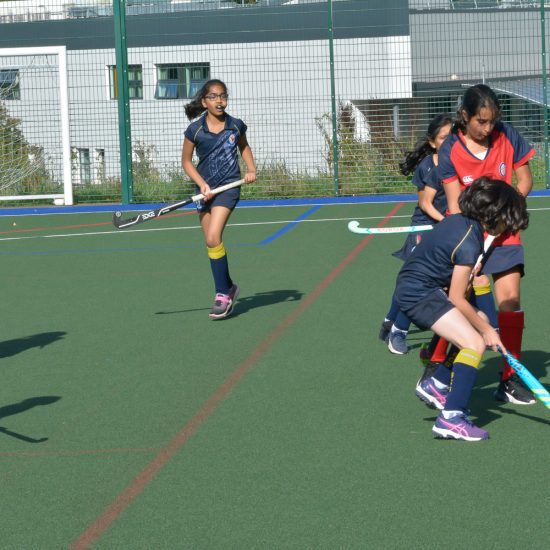 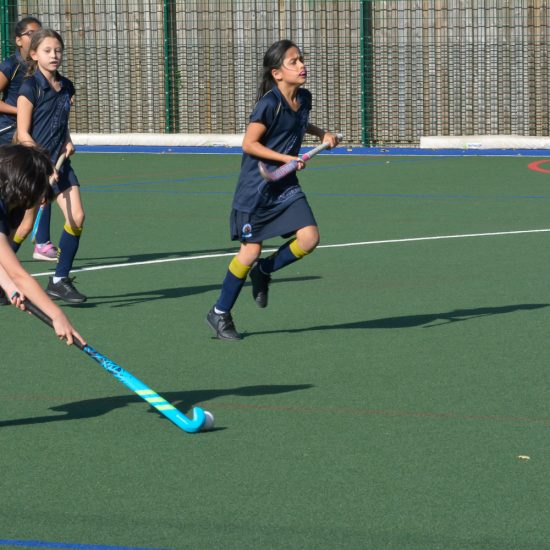 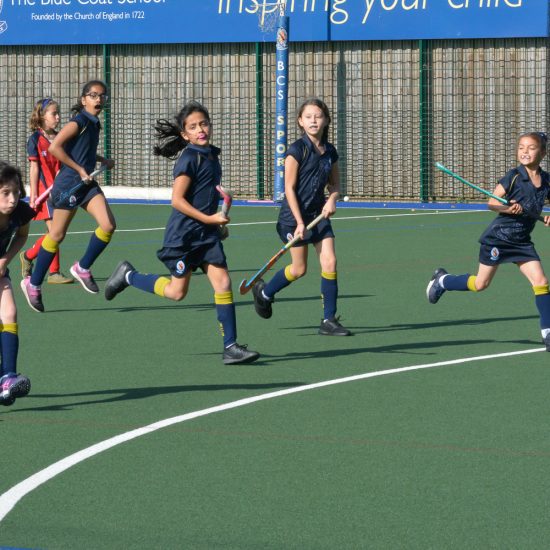 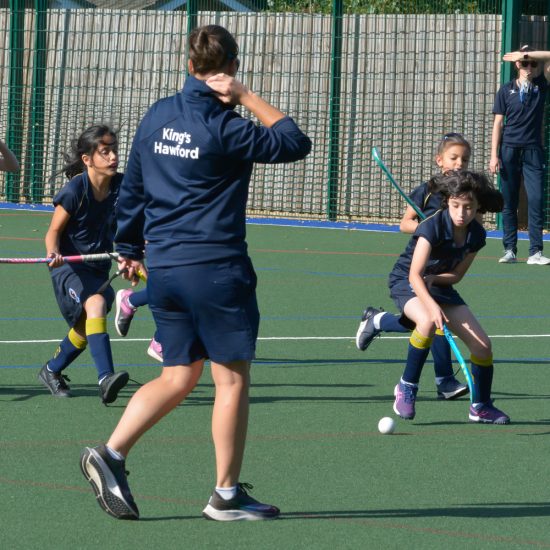 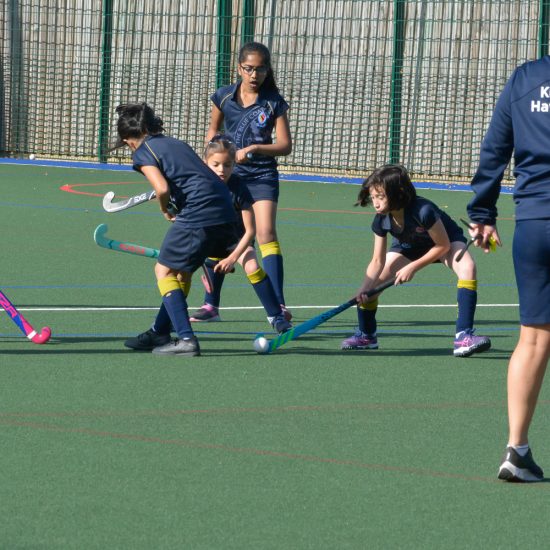 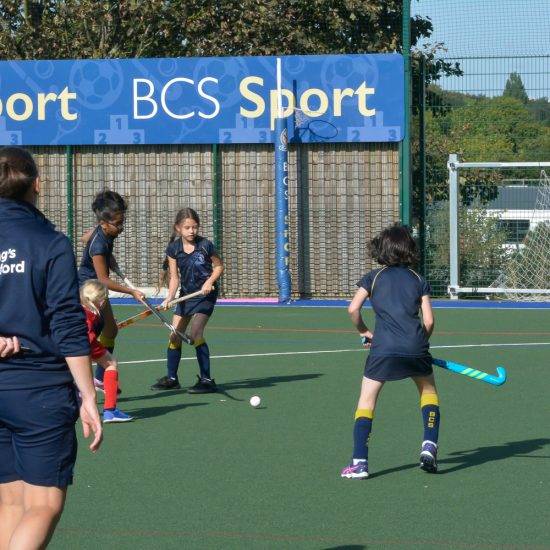 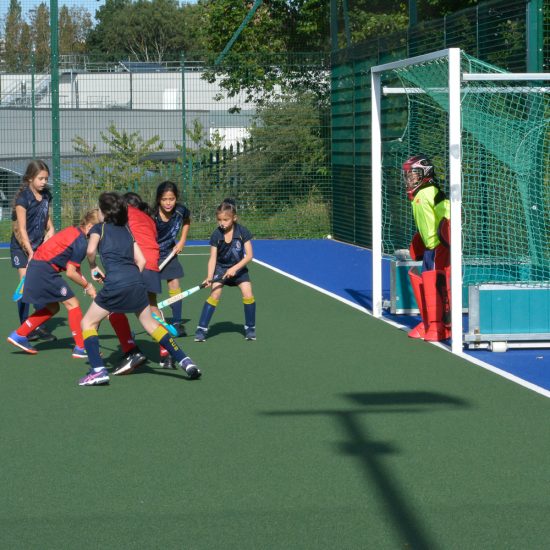 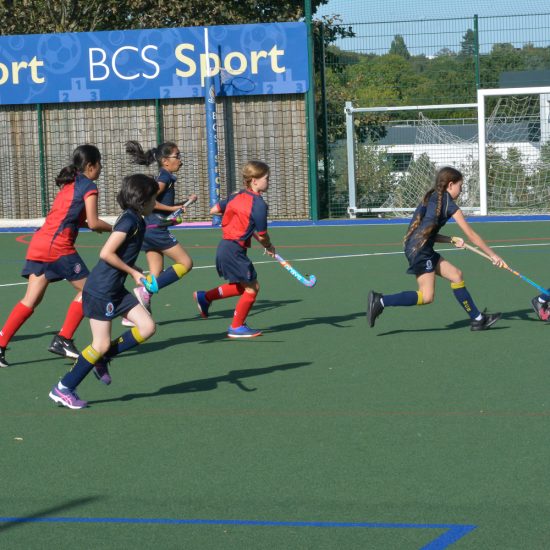 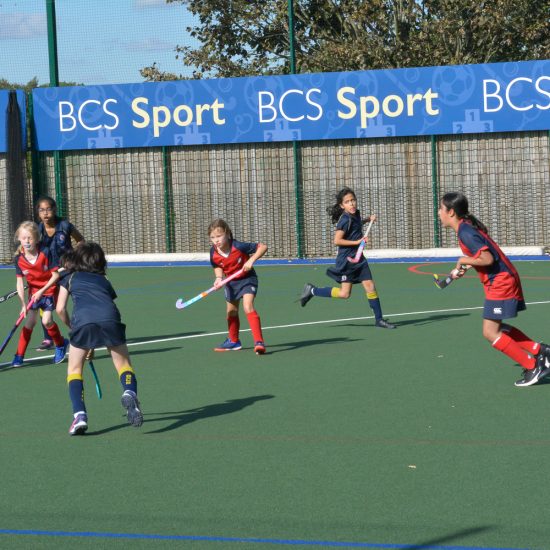 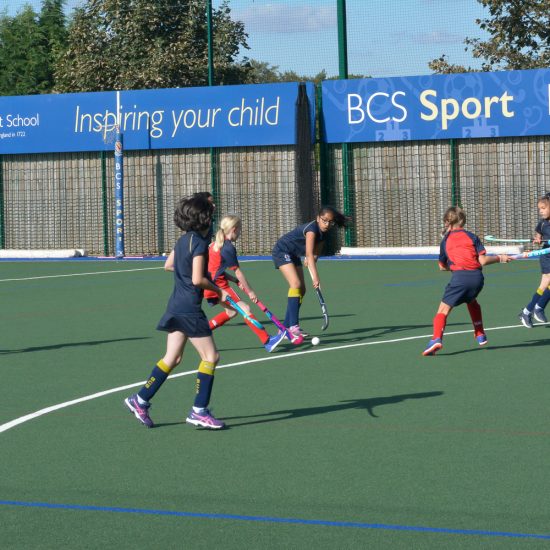 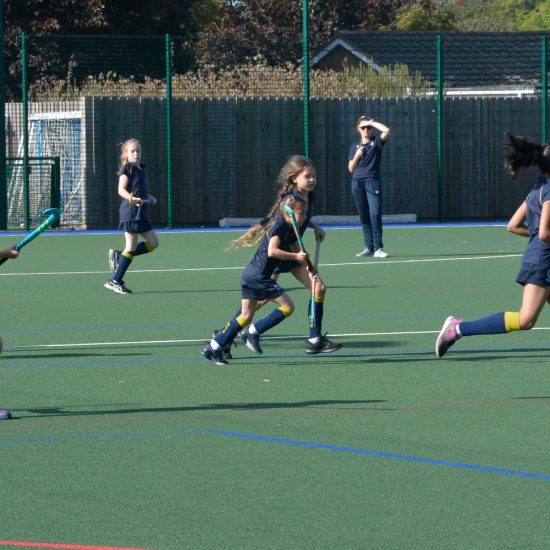 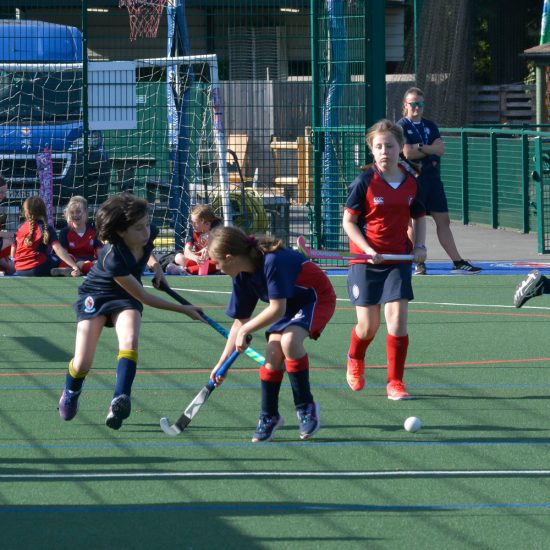 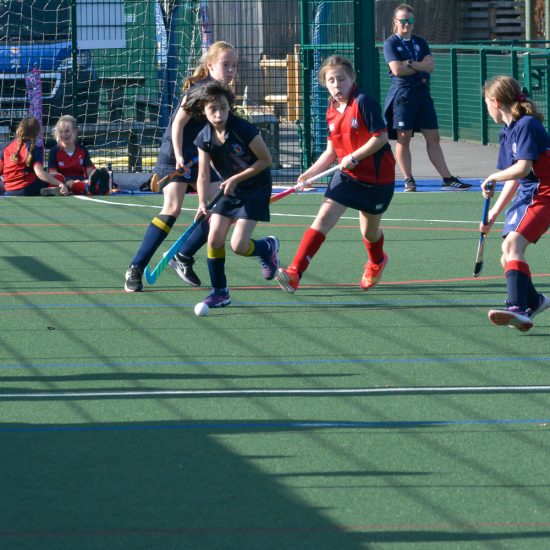 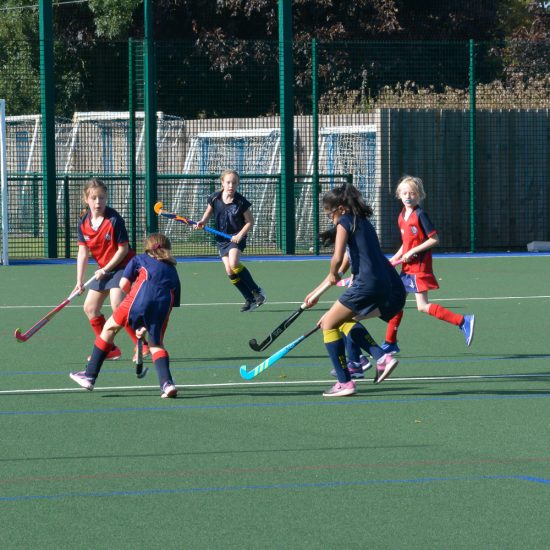 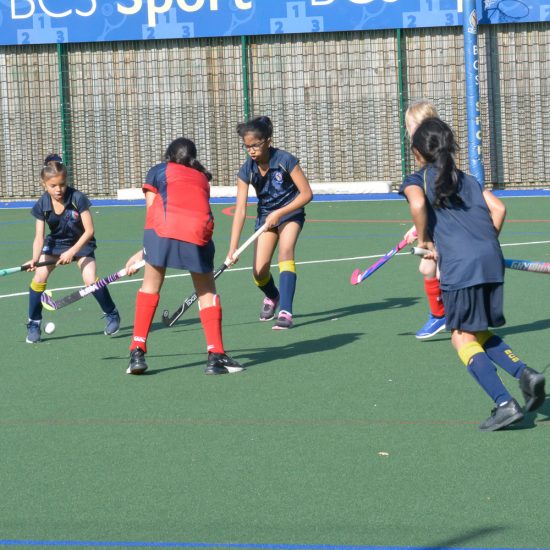 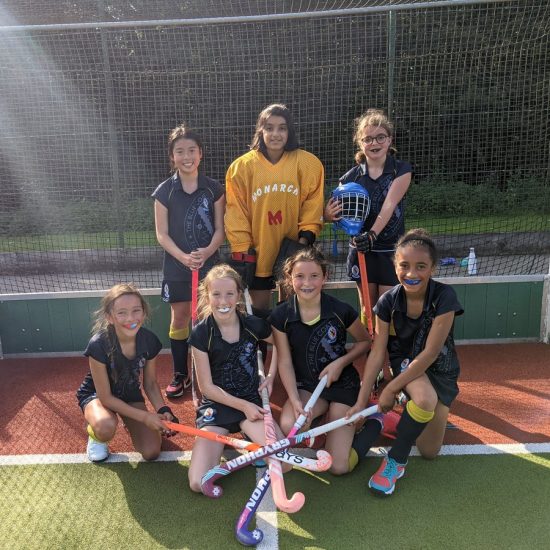 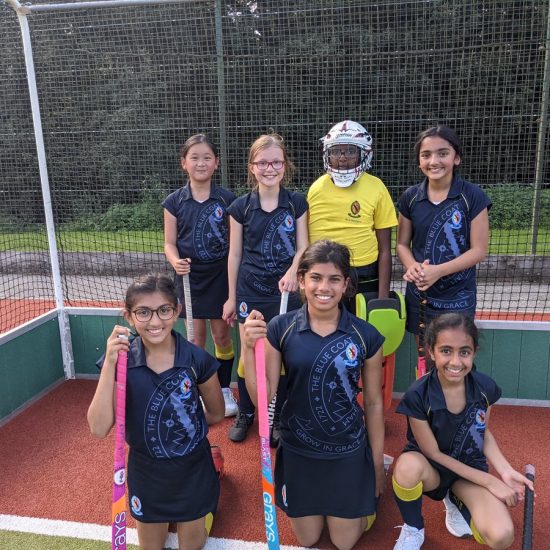