This was a challenging and physical fixture which could had gone either way. As a team we looked after the ball very well, taking the ball into the tackle time after time. We were able to put into practice running onto the ball and punched our way through their line of defence. Unfortunately, for the 5 minutes we attacked, they scored in 30 seconds. Despite this, we remained focused and persevered well. We were able to keep the attack going well with the use of offloads which meant the support play was strong throughout the game. We seemed to make the game harder for ourselves by continually running into contact as opposed to space. Something which the opposition did very well. A good game and we deservedly came away with another win. Moving forward we need to start to look at our line of defence, but that will come with more game understanding.

The U9s faced Eversfield this afternoon, for the second time this term. This time we played against them at their school and this was the U9s first away fixture. I think the girls were just as excited to travel on a minibus as they were to play some competitive Hockey! This excitement transferred onto the pitch and as soon as the first whistle blew the girls got stuck in and were confident on the ball. However, Eversfield were quick to tackle and managed to score a couple of goals within the first few minutes. BCS didn’t drop their heads though and continued to fight for possession. Unfortunately, the girls lacked the ability to create space and hold their shape which prevented them from bringing the ball out of their defence. At half time the score was 4-1 to Eversfield. Going into the second half the girls understood what they needed to do in order to try and level the score but this was a little bit more difficult to put into practice and something we will work on in the coming weeks. When the girls did create space and got into the right position there were some good examples of teamwork, resulting in opportunities to shoot at goal. The girls managed to score 1 more goal in the second half, with the final score being 6-2. A good learning experience for the team and lots to take away to practise for our next fixture. Well done all!

The U9B team did not fail to disappoint again this afternoon. Showing that they are tough competition! The girls played really well overall, demonstrating good strength on and off the ball. Definitely not afraid to go in and tackle they won the ball off Eversfield time and time again, demonstrating excellent defending skills! Sometimes as quick as they were to win the ball though, they lost it just as quick. The U9B team needs to practise winning the ball and keeping possession, something we can take back with us to practise in school! If they created some space for each other, I think it would help open the players’ vision of where the ball needs to go next! Having said this, when the ball did travel into our attacking half we managed to work the ball around the defenders effectively and take the ball to goal/ The final score was 5-0 to BCS. Kyra Sandhu, denied countless opportunities for Eversfield to score and was a well deserved player of the match! Well done to all of you though girls, it was a pleasure to take you on your first away fixture.

The u9A team played in a Touch Rugby festival with three back to back challenging games against The Croft Prep, Bromsgrove and then Solihull. In the first game BCS were a bit slow out of the blocks conceding an early try but then started to get used to surrounding with some direct forward running from Freddie and Noah and some good support play by Rayan that resulted in a well finished try. For the rest of the game both defences cancelled each other out with the draw a fair result.

Into the second game versus Bromsgrove again a slow start enabled Bromsgrove to take a 3-1 try lead into half time. However, a determined BCS game out for the second half with the bit between their teeth and Rayan finding gaps in the defence and Umar showing his pace on the wings. The game finished three tries a piece in a very entertaining game by both teams.

Into the final game of the afternoon BCS finally came out the blocks at speed and led 4 tries to 1 at half time with some smart finishes by Noah, Rayan, Jasper, and Freddie. They continued this into the second half with a beautifully worked try from one side of the pitch to the other with some flowing passing moves with the end result 5 tries to 2. A good afternoon with plenty of learning and development facing different and challenging opponents.

Three back-to-back challenging fixtures firstly against The Croft Prep, then Bromsgrove and finally Solihull. Game 1 started positively, despite the score line going back and forth, BCS ran well into space and we were able to close down the attack quickly. The game ended as a win for BCS. Game 2 was a game of two halves. First half, BCS dominated with Carlino, Liam and Oli running effectively into space. Brandon, Finn and Rohan all quickly making tackles forcing the turnover. 2nd Half meant playing slightly uphill, allowing Bromsgrove to get back into the game. Our defensive line stopped moving forward giving them the opportunity to run into space. Finally, our last game was more of an all-out battle. On several occasions, we did all the hard work to recycle the ball and run quickly into space to then drop the ball in the final moments. They had a very fast player who we struggled to stop due to his sheer speed. The game ended in a draw which was a fair result. 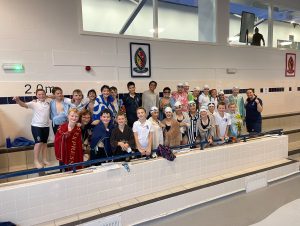 Our opening gala of the year was held at BCS against Bromsgrove. With over 60 children competing across the two schools, the poolside arena was electric! We welcomed parents and spectators who shared in the excitement encountered during both individual and relay races. With the opportunity to swim additional events, the children were adaptable and professional showcasing their talent throughout. BCS dominated the pool with a winning streak that commenced from the first heat as Arjun Gill sped through his individual 25m Freestyle securing first place. The children’s hard work and dedication to training was identifiable during the gala as swimmers performed strokes efficiently, with their racing starts giving a huge advantage over the opposition. BCS swimmers demonstrated their true BCS Values including Wilf who persevered through races despite slipping off the block and losing his goggles! The U10 girls won their freestyle and medley relays by nearly a length with superb performances from Rosie, Anna, Mia, Aaria and Lydia who also swam up an age group in some events in the programme. A fantastic opening gala showing promise from all who participated- a thoroughly deserved win! Well done all!

The U11A team had a fantastic fixture against King’s Hawford with the visitors narrowly gaining the win by a single score. In what was a game of contrasting fortunes BCS started the game very well with some powerful running from Ratti and Graves however a sign of things to come came at the end of the 1st quarter when King’s electric winger showed a clean pair of heels to everyone to score from behind his own line. This player was the real difference between the 2 teams although it was also obvious that King’s had played far more games against quality opposition and tackled far better both individually and as a team. In truth whilst there were lots of mistakes in attack it was the collective defence which really let the team down with a number of players not really trusting the system and allowing their winger far too much space and time. As the players tired these spaces became greater and the number of missed tackles increased. This was hopefully a great learning experience for the boys about how to defend against someone who was seriously fast, and how important it is to get to them before they hit top speed!

In an extremely competitive fixture the u11 B team just came up short against a well organised King’s Hawford team. With a some direct forward running and heavy tackles in the game this was a great lesson for the BCS team in how they need to be quick to get to the ruck to protect the ball for their team and be strong in the ruck when driving through the gate. Tries were scored by Stefan, Felix, Kanav, and Adam with Kanav scoring a brilliant try that included a dummy pass timed to perfection that bamboozled the opposition defender. A great learning experience for the team with their resilience and competitiveness tested.

A thoroughly competitive game for the U11 C team against a strong King’s Hawford team that saw the U11 C team come from behind in the final quarter to be victors in a close contest. BCS started on fire with Mohammad scoring a brace of tries and Faiz scoring a try to lead 20-5 at the end of the first quarter. However, King’s came roaring back and led 40-30 at then end of the third quarter. the BCS defence was tested with good tackles from Lucius, Tom, and Arjun. Into the final quarter BCS needed to have a response and that is what happened. A brilliant jinking run by Nihal found a gap in the defence and then Arjun timed a brilliant pass out wide to Nihal to score again. BCS added a further two tries to make the game safe and record a victory after coming from behind. A great game where rucks were involved for the first time. The U11 C team adapted excellently showing development in their Rugby.