Whilst we all love winning, I hope the boys understand after yesterday that playing within the scope of the BCS values is far more important than the result. Unfortunately, the over competitiveness of both sides overshadowed the high quality of rugby. That said, some of the rugby on display yesterday was superb. There were off loads galore and tries aplenty with players such as Silas Saha once again showing the vast improvement he has made this year. England when they won the World Cup in 2003 had a very simple phrase which they used to help them with dealing with the enormity of the situation and that was ‘T-CUP’. It stood for “Thinking Clearly Under Pressure” and hopefully a few of the boys who played yesterday will take this on board moving forward.

In the final House Rugby matches of their BCS careers, St Philip’s were the victors in the Chiefs game. In cold conditions it was St Philip’s who started on fire in the first quarter, demolishing the St George’s defence by taking an early 4 try lead. St Philip’s displayed some excellent passing and support play with Jacob and Tom timing their passing to precision to allow their pacey wingers Milo, Jia, and Arjun to score early tries. St George’s needed a response and after a team talk they came back firing with some more aggressive tackling and defensive play. They responded with a couple of tries scored by Aarya putting pressure on the defence and Mohammad, with some pacey and direct running. Going into the last few minutes of the game it was a close battle between red and green but with some tough tackling and again some forceful forward running St Philip’s were able to put daylight between them and St George’s with tries scored by Adam, Jia, and Nihal for in the end a comfortable win for St Philip’s. The game was closer than the scoreline shows but St Philip’s were helped by their blistering start to the game.

As a teacher I thoroughly enjoyed this fixture. Throughout it I had memories of the past 4 years’ worth of House matches and I felt myself reflecting a lot. What made me smile was to see the progress every pupil had made with regards to their rugby performance and understanding throughout their time at BCS. In years gone by pupils who lacked confidence ran away from the ball or passed it away as soon as they received it. Whereas I observed superb direct ball carrying, attackers running into space, support running and most importantly some tremendous and brave tackling. Regardless of the score line today, seeing each pupil grow in confidence and able to fully compete in their House match made everyone a winner today! 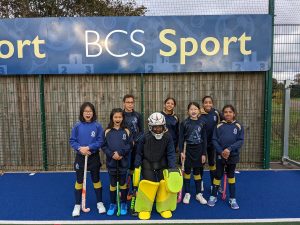 This was a great way to start the final Year 6 hockey term and was made so much better as I could see how much progress pupils had made. We attacked as a three with Elaine, Isabella and Jaskiran showing confidence when on the ball, dribbling past players to pass to Liang. Esmee worked hard in defence and was keen to get on the ball and play. Both Ramneek and Yashna ran with so much energy, up and down the pitch, to help both defence and attack and finally Yashna got her reward when she scored. After several attempts Liang Zi finally put the ball in the back of the net and celebrated like she had won the World Cup! Solihull did come back at us and Evangeline made a couple of great saves to keep us in the lead. A well matched game where our determination to stay ahead won us the game.

Having just watched the C team, the D team came out with the same determination to get the ball. The work ethic was high as Safiya took the lead in trying to win the ball. We did our best to press Solihull and Isabella was onto the ball quickly when they played out from the back. Solihull scored first which was against play but this did not knock our spirits and with Emma and Bavanjot’s drive we ploughed on through them and Isabella equalised. Solihull started the second half well but Maysahm stayed resilient and kept BCS on the attack. With the pressure mounting we had another shot from inside the shooting circle and the Solihull goalkeeper unfortunately kicked the ball into her own goal, so we won. Had the goalkeeper not made this mistake I am confident that another goal would have been scored by us as Erin, Isabella and Maysahm continued to apply pressure on the ball and Solihull did not really get out of their own half leaving Aalisya with little to defend. A great match to be part of as it enabled me to see the progress of the whole team.