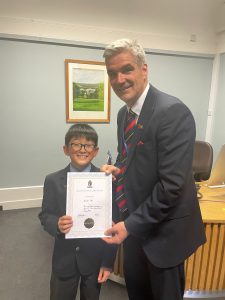 Congratulations to Kevin in Year 6 who was awarded a runners-up prize for his creative writing in a competition run by Silver Robin magazine. Kevin entered the Silver Robin writing competition in the summer and wrote a piece titled ‘Escape’ about the effect of hunting to innocent birds.

You can read his piece below:

Max sang in joy as he zipped through the air. A great oak tree stood strong and proud, protecting the smaller pines and ferns that were scattered in the acres of land that Mr Mont owned. Tom and Billy shot past, turning abruptly in mid-air. “Hey, Max – what’s up?” Tom tweeted. “Shall we go to that cheery old gentleman again?” He said with a mischievous glint in his eyes. The two woodpeckers darted away in a streak of fiery red and Max had no choice but to follow them.

Mr Mont gazed at the three small birds flying elegantly through the air. He felt a pang of guilt that the shooting party was coming to kill the magnificent creatures in the forest just two hours away. Even his morning cappuccino didn’t lift the weight from his heart.

In the Great Oak Nest, Mother bird flapped her wings, butterflies fluttering in her stomach: where were those children? Flustered, irritated and worried, she cried out their call, “Tweeeet, tweet, to tweet!” A faint chirp echoed her call far away.

“Oh no, mother has called!” Billy tweeted and paused to rest on a magnolia tree. Max and Tom glided down. The magpie hastily said, “I really do think we should be going, it’s nearly past breakfast!” Tom rolled his eyes and huffed, “Fine, let’s go. But we all go to the gentleman tomorrow, okay?” He glared at Max and Billy – it almost seemed like an order. They both reluctantly agreed and sped away.

Chaos broke out in the forest and the first shots of death began, killing two pheasants. The woodpecker family chirped with rage and Mr Pecker, one of the most respected birds in the forest shouted, “Everyone, come to the Tree Haven!” A mass of wings fluttered towards the oak tree and darted into the Tree Haven. It was a large space between the branches. Logs filled up the gaps which were carpeted by dead brown leaves. A wall was built along one side, made by Blue Arrow and Shadow Flash themselves. They were two famous birds, one a magnificent magpie and the other, a stunning sparrow. Max and his family were direct descendants of Blue Arrow.

Bullets filled the skies sending all sorts of birds lifeless. The trio of young birds felt panic prickle their nerves and fear invade their system. “We need to cross, go in the shade, that’s what my grandfather always said.” ordered Max. The twins followed him through the branches. Max knew where to go if there was danger- out of the forest. A river flowed, separating the friendly shadows. As they hopped across, Billy howled in pain. Blood was oozing out from his wing. “Brother!” cried out Tom. More shots fired about them, each bullet cackling with glee. “No, no, no!” He turned around with empty eyes. “My twin is dead.” He whispered.
“Tom, we have to go,” said Max. Tom nodded, and they both flew as quickly as they could, leaving the forest and their family and Billy.