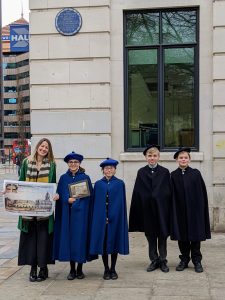 The year 2022 has finally arrived, not only is this an important year because it is HRH The Queen’s Platinum Jubilee and the year that Birmingham will host the Commonwealth Games, it is also 300 years since the founding of The Blue Coat School!

Last term we began our preparations with a whole school Creative Arts project which saw the building of a giant mosaic depicting a Blue Coat boy and girl walking towards St Philip’s church (now Birmingham Cathedral).  We are looking forward to seeing this installed on the end of the Centenary building, later this term.

This week, we retraced the footsteps of former pupils by returning to the original site of The Blue Coat Charity School in the centre of the city. Our House Captains located a historical blue plaque which now marks the spot where the first Blue Coat School once stood. They took the path that former pupils would have taken that led to the west door of the Cathedral. Pupils used to attend two Sunday services there each week and the Chapel Choir would have sung as part of the service, very much like in our services today. In addition sermons were preached in Churches and Chapels across Birmingham for the benefit of The Blue Coat School, with the Chapel Choir singing in the services and collections taken in support of the School. We still have records dating back to the 1800s which document some of these services.

Chaplain pointed out the memorial plaque bearing the name of Henry Price who was the Secretary of The Blue Coat School for 33 years and is interred in the Cathedral. We were able to find reference to his term of office in copies of the old annual reports of the School Committee (the former equivalent of our Governing Board) and we remember him each year by laying a wreath at our Founders’ Day Service.

So from our former School Chapel of 200 years to our current School Chapel which was completed in 1932, two years after the School’s move to Edgbaston. The Blue Coat School Chapel was built in order to express the Christian ethos that was central to the School’s philosophy. After its completion, the Chapel was used for daily worship with parents invited to Sunday evening services. Parents were allowed to sit in the gallery but not to communicate with their children who they had ‘signed over’ to the responsibility of the School’s Subscribers!

The organ that is installed in the Chapel today, was added as part of the last major refurbishment in 1982. As we enter our 300th year, we are about to embark on the next significant refurbishment which is on an even greater scale. As part of the work we have commissioned a commemorative stained glass window. Much like the beautiful Edward Burne-Jones windows were added to the Cathedral and would have been a beautiful backdrop for our earlier services, we will soon be able to have a stunning window behind our altar here in Edgbaston. Chaplain and the House Captains visited Birmingham Specialist Glass Company to meet the owner Colin Brittle, who together with designer Louise Hemmings of Ark Stained Glass, are working on our window. It was incredible to have a sneak preview of the Blue Coat design which features the 5 saints associated with BCS – St. George, St. Philip, St. Martin, St. Monica and St.Margaret, as well as a Blue Coat boy and girl, the BCS values and the Grow in Grace motto. Lifesize working drawings have now been produced and coloured glass ordered, so it is time to start cutting out! Louise explained that the most time consuming thing will be the level of hand painting required, for example the faces of each saint will take 2 to 3 days and having witnessed Colin cutting out a piece of glass to size, we know just how much skill and expertise is needed to produce a window of this scale and to bring it to life in 3D.

Back at School, today we held our 300th Opening Chapel Services, fittingly taking place in the Chapel for one last time before its big makeover. We hope that the whole school community will have enjoyed learning more about our many years of history and have a greater understanding of the School’s origins. Some photos are included below but a recording of the Prep services will be shared with parents in next week’s Update. The children and staff were all presented with an anniversary pin badge by Mr Singleton, Chair of Governors and the 300th celebrations were officially launched! Thank you to Chaplain, Mr Nicklin, Miss Akehurst, Mr Hill, Mrs James, Miss Levett, Mr Finglas, Mr Newman, Mrs Creaton, Mrs Barrowclift, Mr Moss and all those involved in putting these services together for the start of the year. It has already been a busy first two weeks of term!

We are looking to rededicate the School Chapel in the Michaelmas term and as part of its unveiling we will be burying a time capsule and laying down a commemorative pathway with named bricks. Families will have the chance to support our fundraising appeal for the Chapel by buying a brick which can bear the name of the family or child, and leave a lasting memory, in perpetuity, of their time at The Blue Coat School. We hope that you will all want to be a part of this moment of history and we will be sharing details very soon, along with information on how you can book a ticket for the various tercentenary events.