A very entertaining end to end game for the U9A team in their first ever football game representing BCS. Unfortunately it just ended in defeat by a goal. The first quarter was extremely closely fought with some solid defending from Jasper and James putting in some last ditch tackles to prevent Warwick scoring. Into the second quarter Warwick started quickly scoring a couple of goals but the BCS boys showed great character and determination trying to fight their way back into the game with Loic being a thorn in the opposition’s side with some jinking runs down the left wing. Noah’s workrate got BCS back into the game with a smart finish to make the score 2-1. Into the third quarter, again Warwick got an early goal but BCS responded immediately after a cross from Noah was deflected into the goal off a Warwick defender.

Unfortunately despite their best efforts BCS could not equalise in the final quarter despite their valiant efforts with exceptional workrate from all players. Noah and Umar were willing runners in attack supported by Loic who showed excellent dribbling skills. James made some brave tackles and Rayan some smart saves in goal. However, player of the match for his excellent positional play and calm distribution of the ball as well as making some committed last ditch tackles was Jasper.

For BCS, the score line doesn’t represent the progress we made in this match. Warwick were strong on the ball and disrupted the ball effectively. Additionally, they took their chances well and scored some nice goals. BCS were a bit like rabbits in the headlights to begin with and appeared reluctant to go into tackles to win the ball. However, throughout the game it was clearly visible every pupil’s confidence grew with regards to their position and their ability in tackles and on the ball. Siyuan showed great tenacity to win the ball and to look to move forward with it creating a few chances for himself. The player of the day must go to Brandon for some superb goal keeping and becoming a brick wall in goal.

The U9 C & D football matches were a great learning curve for the BCS boys as they came up against some very strong opposition from Warwick, who could not only kick the ball very powerfully, but also had good technical appreciation as well. Both teams will have learnt a lot and can take heart from never giving up and trying really hard in the face of adversity. Lucas Gurney shone for the D team whilst Idris Douis worked tirelessly for the C team.

This was a game in which BCS were extremely unlucky not to score. Working incredibly hard as a team, James, Lucian, Jack, Jayden G, Jayden L and Jayden Liu managed to perform extremely well against a very well organised and tough Warwick team. Eventually, Warwick ran away with the result but the boys can look back on the game and be immensely proud of how hard they worked, and how well they played as a team. The referee from Warwick was keen to point out how well James had done with his dribbling and getting as stuck in as possible, and for this he was awarded man of the match, however all of the team played as hard as they could and can be extremely proud of how they did. Great effort boys!

Coming up against a strong Warwick team with some fast and talented players, BCS struggled early on to find their feet, and while no goal was scored, the effort and teamwork that was on show was exemplary. Having less players than the Warwick team, who were able to make substitutes regularly to avoid tiredness, BCS managed to keep the ball well and showed some lovely skills in trying to get the ball towards the goal. In particular Salmaan and Jonathan showed incredible work rate and technique to nearly break through on many occasions. Each player had the opportunity to play in goal if they wanted and Isaac, Jerry, Krish and Joobin all made great saves. A fantastic effort from all involved and man of the match was extremely close, but Salmaan’s relentless energy and tirelessness meant he was awarded the title this week. 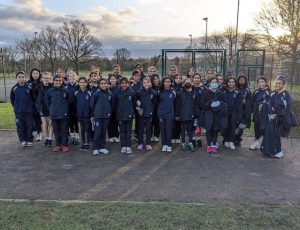 With all of Year 6 girls participating in a match it was a very exciting start to our Netball term. We started off the first half slowly but grew in confidence as the time went on and started to mark better and gain interceptions which kept us in the match 4-2. I made some changes in the third quarter and whilst we competed across the centre third we struggled in the shooting circle. The final quarter remained as the third and whatever combination we tried we just could not seem to score. This made a huge difference as Bromsgrove pulled the score line further and further away for us. The match would have been a draw had we scored all the shots taken so whilst our passing down court was good, we still have plenty to do with regards to shooting and rebounding.

This Wednesday all the U11s girls made their way to Bromsgrove School for their first Netball fixture of the term. It was a super afternoon of Netball with a mix of results from the five teams (A-E). The U11B team’s game was end to end for the majority of the match. A game where the teams were evenly matched from start to finish, making it a competitive match to play and watch. The only real difference between the two teams was that Bromsgrove were able to successfully shoot and score! BCS girls had just as many shots at goal but were unable to convert. Bromsgrove wanted to play with a full height post, whereas we have been practising with a 9ft post, in keeping with Bee Netball rules. This unfortunately made the difference for our girls as they were not used to shooting at this height! However, the girls worked hard for each other, there were so many tips on the ball, demonstrating excellent marking! There were also some lovely passages of play down the court at speed. At times of course, we crowded and made silly errors, but we quickly learned from them. Although we weren’t victorious I was really impressed with the girls this week. Well done!

The girls worked really hard against a strong Bromsgrove side. They struggled to get free against some tight defence and often got a bit crowded on the court. As the game progressed they got better and started driving in front of their defender to win the ball. Mira held her space really well and was great at getting free and helping work the ball down court. Again the tall post height made it difficult for our shooters but they persevered and were rewarded with a goal. A hard first match but the girls stuck with it and kept battling until the final whistle.

Blue Coat got off to a strong start, driving forward and passing the ball nicely down the court. Our shooters used their height to their advantage in the D and we were unlucky not to score a few more. Our shooter worked hard in the D but with the full adult height goal posts struggled to get the ball in. Evangeline was excellent in defence, reading the game and darting in front to get numerous interceptions. The girls worked really hard as a team and stuck at it and should be really proud of their performance and the win. It’s been a long time since Year 4 and their past competitive netball fixture!

This Wednesday all the U11 girls went to Bromsgrove for their first Netball fixture of the term. The U11E game was full of excitement and fun. In the first quarter the girls were crowding around the ball and making some footwork errors. After our team talk the girls’ game began to flow. BCS girls were controlling the game, getting into space and they started to score goals even though the posts were very high. The last three quarters were great to watch and the girls confidence continued to grow. Bromsgrove had some fantastic marking and intercepting which pushed the girls to play harder and become slightly more aggressive. I was very impressed with the girls this week.