Off To The Nationals Again! 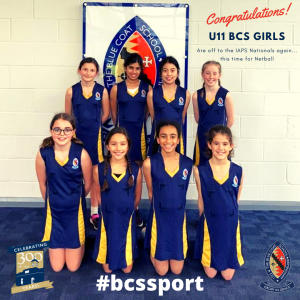 Last week the U11 IAPS Netball squad made their way northbound on the M6 towards Sedbergh Prep School to compete in the Regional Qualifier Netball tournament. From the moment we set off the girls represented themselves and the School to the highest standard and were an absolute pleasure. Sedbergh Senior School, where the tournament was hosted, had fantastic facilities and it was a real privilege to be able to play there inside their double sports hall.

This tournament was a round robin, where each team played each other. This involved 7 matches. Our first match was against Sedbergh School. This was a very competitive match right from the first whistle. The opposition where tall and had been taught to use their height to their advantage enabling them to move the ball into the circle at ease. We didn’t let the opposition run away with it though and used our speed and timely runs to keep it a close game. However, in the second half we made a couple of poor decisions, throwing the ball away, costing us some vital opportunities to get the ball into our shooting circle and score. This was a game that we were still ‘warming up’ in and although Sedbergh played well, I believe they were beatable!

Winning the next couple of games comfortably at lunchtime we knew we needed to win our last three games to make it through to Nationals. Richmond House was the next team below us on the table and so it was the match that would decide who went through. We went out with a force and stormed ahead as quick as we could, into the game. We finished the game 8-3 which was a fantastic win for the girls and secured our place into the Nationals finishing the tournament in second place.

Playing some well drilled Netball throughout the day, the girls demonstrated their versatility, having to rotate round the different position. A super performance and a really pleasing result. Next stop Nationals on Friday 18th March, bring it on!