The U9A Football team had a disappointing afternoon at the RGS The Grange Football Tournament. In the first game despite dominating possession, BCS could not convert their chances. RGS on the counter attack and due to a lapse in concentration in our defence, managed to sneak a goal to send BCS to a defeat. Into the second game versus Moor Park, BCS again created a lot of chances but were failing to hit the target; once they did they powered through to a 3-0 victory with goals from Loic and Noah, but in all honesty the score should have been double figures!

Into the third game against The Elms it was a fairly even contest but BCS did have most of the possession playing some nice passing football but again failed to convert or create goal scoring chances. In defence Jasper, James and Rayan C were solid preventing any chances for the opponents but the game finished goalless. Into the final game of the group BCS faced King’s St Albans knowing a win would give them a good chance of qualifying for the semi-finals. Again the defence stood firm and once more BCS had a lot of possession but did not look threatening with it. We failed to take on defenders in the attacking third or put good crosses into the penalty box for goal scoring opportunities. The game finished 0-0 with BCS finishing on a total of 5 points from their group games and not enough to get through to the semi-finals stage. A good lesson learnt by the team – with tournament football being short and sharp they must be ready from the blow of the whistle and play with an urgency, intensity and tempo to create a great chance of winning a game of tournament football. 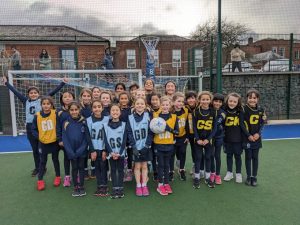 The girls did really well to get ready and were motivated for their match versus Solihull after a very late start. The matches were a mixture of indoor and outdoor matches but all with the 5-a-side format and rotation system. This allowed all girls to get the opportunity to show their centre court, shooting and intercepting skills. Our passing and moving was really good and in attack we seemed very dominant when on the ball. I observed some great interceptions from players and calmness when looking to pass to a teammate. Overall, we played really good netball and for the future we now need to work on tidying up our footwork.

This afternoon the girls made their way to Warwick Prep School. This is the first time we have played against Warwick Prep in a fixture, we have only ever faced them before in tournaments, so it was exciting for both staff and girls to travel and play somewhere new! Unfortunately, due to the weather the A-H fixtures could not go ahead, as their outside courts were not safe to play. However, we still managed to get three of our team a match, playing in their sports hall.

It was another opportunity for the girls to play Bee Netball (5-a-side) this afternoon. Showing us how much they have improved in a very short space of time; we won all three matches this afternoon. Warwick were not easy opponents, but we played some very fluid Netball at times, across all three teams. We were able to work the ball down the court, pushing the ball into space, created by the girls making timely runs. If I was to give the girls something they can work on, it is their ability to keep the ball safe. Time after time, we fought hard to intercept a pass, but then in a panic we would throw the ball straight back away, undoing all our hard work. We all need to focus on ‘safe hands’ and selecting the right pass at the right time. Overall, though, I was very impressed today, Warwick were a good opposition, but our hard work has paid off! Well done girls. 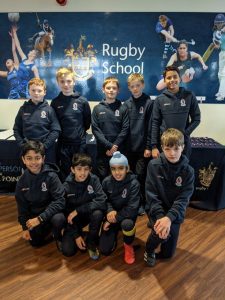 For a team that, technically, according to IAPS, shouldn’t have been there, the boys certainly proved themselves worthy contenders. The morning started with a great gesture from Mrs Bennett who surprised the team with some tournament hoodies. With the games being only 12 minutes one way – one mistake could be costly, so the stakes were high. Our response, as a team, was amazing playing! We were calm on the ball, played the ball forward and wide quickly and kept our shape well in attack and defence. The first game was against Hall Grove, which saw us hit the post and then be beaten by the buzzer when we had a one-on-one opportunity ending 0-0. The second game was a game we could have won against Warwick but, unfortunately, we didn’t capitalise on our opportunities, again finishing 0-0. A superbly executed short corner meant we picked up our first loss of the day against Fettes. The boys kept their composure and had a great response by  beating Bedford 2-0. After four games and one to go, this put three teams all on equal points, but Blue Coat’s next game was top of the league – Saint Ronan’s. It was a must win game to go through to the cup ¼ finals. This was the performance of the day! An early goal followed by a late penalty corner meant we were going through to the ¼ finals as runners up of the group. The ¼ final was a fiercely competed game in which BCS were aggressive on the ball and defended brilliantly. Unfortunately, the umpires deemed us too aggressive and awarded a penalty stroke which ended up being the only goal of the game. The result was hard to take but, as always in sport, a lesson to be learnt. The additional sting in the tail was that St Ronan’s were the overall winners. Despite this, the boys should be so proud of what they have achieved in such a short time against schools who play a term’s worth of Hockey. A fantastic journey and hopefully one they will remember for a long time!