The Year 5 Maths Challenge took place on Wednesday this week. In this fantastic competition four Year 5 mathematicians battled against a number of other local Independent Schools.
The first challenge the team faced was a crossnumber puzzle, where the children had to work as a team to solve very tricky clues to a mathematical crossword. The second challenge was both a mental and physical challenge as pupils relayed against each other to earn points for their team.
Following lunch, whilst the scores were totted-up, the pupils were treated to a lesson delivered by a member of the KES Mathematics Department, involving strategic thinking and probability. Following this the pupils were wowed by a most exhilarating talk and demonstration by Barney Maunder-Taylor, a mathematical entertainer.
Finally, it was time for the results of the challenge and the presentation of prizes. After all the nerves and excitement, Aditya, Ismaeel, Thomas and Vidur were announced as the winners of the Year 5 Maths Challenge 2022!
A superb end to the day, as Blue Coat walked away with some wonderful maths puzzle prizes and the Borcherds Shield for achieving first place in the competition!
Miss Fagan 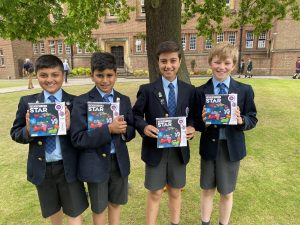